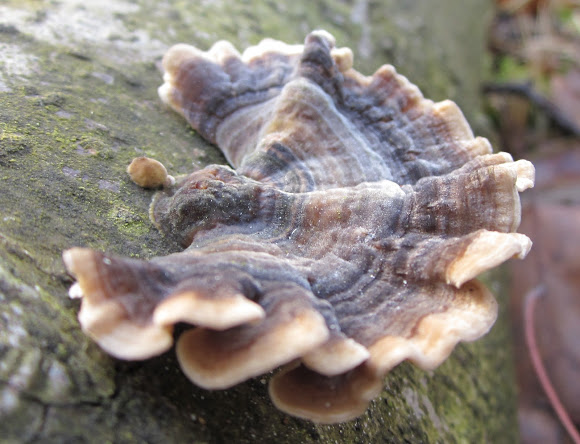 Trametes versicolor, often called the "turkey tail," has the dubious distinction of being the only member of the forest fungal fowl community not named for the full bird, but a feathery fraction. However, the chicken of the woods and the hen of the woods look nothing at all like chickens or hens, while the turkey tail does look (vaguely) like a turkey's tail. Who started this clucking menagerie of mushroom monikers, anyway? Was Old MacDonald a mycologist? Trametes versicolor is one of the most common mushrooms in North American woods, found virtually anywhere there are dead hardwood logs and stumps to decompose--and, occasionally, on conifer wood too. Its cap colors are extremely variable, but tend to stay in the buff, brown, cinnamon, and reddish brown range. The mushrooms are strikingly "zonate" with sharply contrasting concentric zones of color, and the surface of the cap is finely fuzzy or velvety. Often the zones represent contrasts in texture as well as color, so that fuzzy zones alternate with smoother ones. A number similar polypores, and even a few species of crust fungi, look more or less identical to the casual eye, and a whole host of mushrooms are thus lumped together as "turkey tails" by collectors who are more interested in gilled mushrooms and boletes. But if you are one of those folks, like me, who just has to be sure, I offer the Totally True Turkey Tail Test, below. ------Totally True Turkey Tail Test: ( http://www.mushroomexpert.com/trametes_v... )