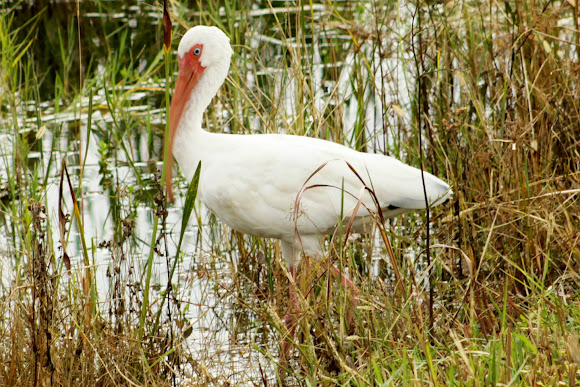 White ibises are white, long-legged wading birds with black wing tips. They possess a long curved bill that aids in feeding. A sexually dimorphic species, adult males are significantly larger than adult females, weighing, on average, about 1,050 grams compared to 750 grams among female ibises. Female bills and wingspans are, on average, shorter than males. The wingspan of white ibises ranges from 56 to 68 cm. Adolescent white ibises lack feathers until they are 4 to 5 days old. At this point, feathers are brownish gray, and do not become completely white until adulthood. Upon hatching, juvenile white ibises exhibit a pinkish white bill that is relatively straight. After the first two weeks, the bill begins to elongate, curve downward, and appears similar to the long distinctive adult bill. During the breeding seasons, male and female white ibises display sexually monomorphic changes. This includes the pink coloration of the bill that fades and becomes black at the tip later in the breeding season. Also, the legs and faces of breeding white ibises are red. A red gular pouch is also displayed by female white ibises. This structural feature is present for about 10 days during the displaying phase of breeding. http://animaldiversity.ummz.umich.edu/ac...