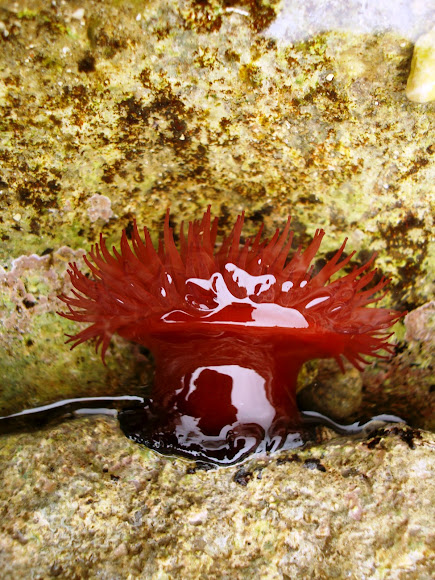 Coelenterata, Cnidaria are a group of marine animals which are resembling a blob of colored jelly. They have one opening which is surrounded by tentacles triggered by vibration of water and moving in the direction of a hole and in that was supplying this hole with a fresh water. Number of tentacles is always multiple of 4, 6, this one in particular has 196 tentacles. It has bright blue spots (acrorhagi) located just beneath the tentacles, organised as an external ring containing stinging cells located at the top of the column that it uses to fight over territory. The acrorhagi contains the cnidocysts which themselves contain the nematocysts. There is some evidence that the various colour forms may in fact be different species.

Red/horse/breadlet sea anemone can be found on rocky shores along the coast, on the border between high and low tide. Its range extends from UK to Western Europe and the Mediterranean (probably as far as the coast of West Africa), this photo was taken on the Adriatic coast where they are most numerous of all types of anemones.

this is such an amazing pic....

Thank you, this anemone is very common on the coast of Istrian peninsula :) Thanks also for thinking that my spots are nice, I think they are a bit too ordinary :/ and I'm just an amateur (chemist by profession, so biology is still something unknown for me)!

This is beautiful. You have really nice spots!

Great shots of this beautiful creature.