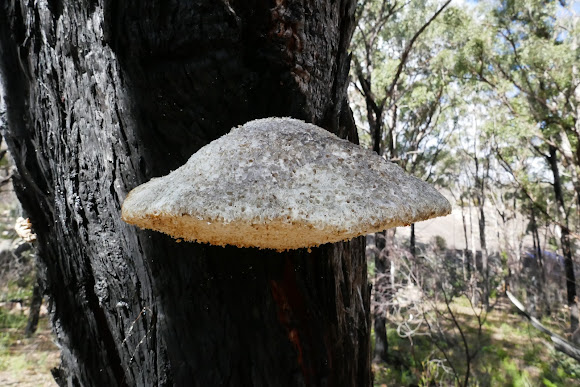 A polypore fungus, Laetiporus portentosus, commonly known as "white punk", forms large, thick brackets on living Eucalypts. It's a member of the family Fomitopsidaceae, and is found in South America, Australia, and New Zealand. It has been used traditionally as a tinder and to carry fire by Australian Aboriginals, and by New Zealand Māori people, although this practice is not confined to these two cultures. I found a number of specimens, and the surface of each was riddled with holes that are made by insects (see reference blog). From a distance, each specimen looked quite solid and had the appearance of white foam, but they were actually quite soft and had the density of firm sponge. I found an old specimen that had fallen from the tree and in an advanced state of decay. Being so spongy, perhaps it became waterlogged by rain, and the added weight caused it to fall?