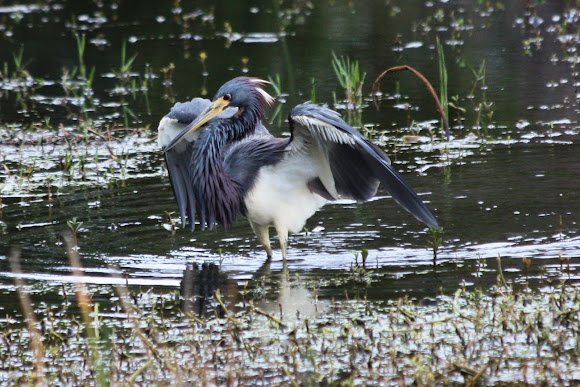 Formerly known as the Louisiana Heron, this slender day-heron is found only in the New World, and is one of 4 North American herons in the genus Egretta (Snowy Egret [Egretta thula], Little Blue Heron [E. caerulea], and Reddish Egret [E. rufescens]). Until the arrival of the Cattle Egret (Bubulcus ibis) in the 1950s, this species was probably the most numerous North American heron (see Demography and populations: population status, below). Although probably not commercially important to the plume trade at the turn of the twentieth century, the Tricolored Heron undoubtedly suffered because of its habit of nesting with more valuable species.

The diet of this heron consists almost entirely of small estuarine and marsh fishes, which it acquires through a diverse array of foraging behaviors. This species is less social in foraging habits than are most other North American herons, typically feeding either solitarily or at the edge of mixed-species groups. The Tricolored Heron is also more commonly associated with coastal habitats than are all other herons except the Reddish Egret. In the United States, food availability and, indirectly, the amount and type of habitat appear to control the number of breeding attempts.

Tricolored Herons are probably declining throughout their North American range. This species is among the most studied of the North American herons: its breeding behavior and displays are particularly well documented (Rogers 1978a, b), as are many aspects of its foraging ecology and behavior (Kushlan 1978, Rodgers 1983, Kent 1986a, b) and nesting ecology (Jenni 1969, Maxwell and Kale 1977a, Post 1990, Frederick et al. 1992). Although much is known about the Tricolored Heron in the U.S., little information is available from the Caribbean and Central and South America. Basic information is needed on estimates of its survival, descriptions of its winter habitat, and molt patterns.