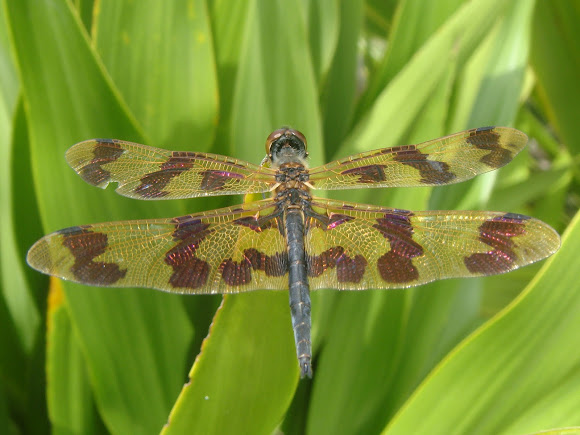 These dragonflies hunt on the wing, gathering in swarms when food is abundant and capturing flying insects in their legs which have bristles that interlock to trap the prey. The legs project forward so that the food can be easily moved to the mouth in flight. A pair of large eyes covers most of the head, so that the animal can see in all directions with only a slight turning of the head. Each eye has thousands of individual lenses that give the dragonfly a mosaic image of the world. The wingspans are around 100 mm. The male and female fly in tandem, the male using special structures at the end of its abdomen to hold the female's head. While in flight, the female bends her abdomen so that its end touches the middle of the male's body, picking up sperm. Then she straightens up and they continue to fly in tandem as the female lays eggs on the surface of the water. The eggs hatch about a week later and the larvae (called nymphs) live in the water, taking in oxygen from the water through gills that project from their guts.The nymphs feeding voraciously on small aquatic animals such as insect larvae and crustacea. They grow rapidly, repeatedly outgrowing their exoskeletons that are cast off by the process of moulting. Just prior to the final moult, the nymph climbs a plant into the air. There it undergoes its final moult and metamorphoses into a winged adult. Blood is pumped into the wing buds that soon expand into the beautiful lacy wings. Rhyothemis graphiptera is found along the north and east coasts of Australia as well as Indonesia, Papua New Guinea and New Caledonia.

A lake. They prefer slow or non-moving water.