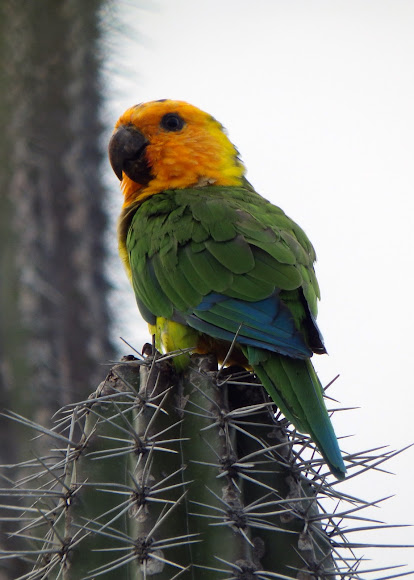 The brown-throated parakeet is mostly green, with the lowerparts being a lighter green than the upperparts. Black/grey beak. Some blue in the wing Feb 3feathers. Head and face colours depend on the subspecies. Though most subspecies are brown-throated, both E. p. pertinax and E. p. xanthogenia have most of the head, including the throat, orange-yellow.

Aratinga pertinax typically dwells in savannas and semi-open dry scrubby habitat filled with cacti and acacias. This species is also seen in mangrove woodlands, tropical deciduous forests (where it is often the most abundant parrot species), gallery and white sand forests, rhizophora mangroves, edges of humid evergreen forests, and agricultural areas with palms and various other trees. The elevation can vary from lowlands to 1,200 meters or higher, although they tend to stay below 1,200 meters. These parakeets inhabit man-made clearings such as city parks or gardens.

A nest made inside a termite mound is shown in the last picture. It is also a species highly threatened by poaching as these conures are easily domesticated.