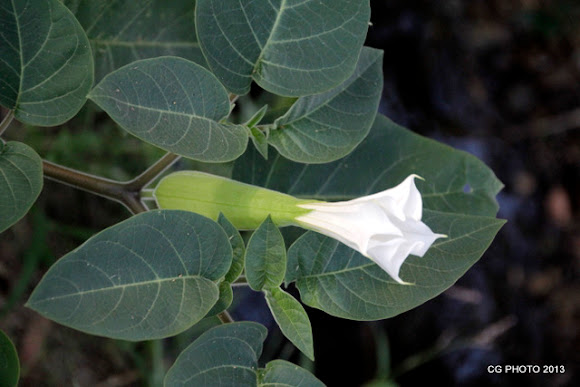 Brugmansia arborea is a perennial bush that grows up to 16 feet tall. It produces five-pointed trumpet-shaped flowers that are pure or creamy white and that exude a seductively sweet scent at night. The fruits are smooth and berry-like, containing large brown seeds. The flowers of these, and all Brugmansia plants, hang straight down, differentiating them from members of the Datura genus, in which the flowers mostly grow upwards (Ratsch 1998, 94-95). All angel’s trumpet trees are originally from South America. They are at present only cultivated, and there are no known wild species. It is still unknown which wild plants originally produced the species we are now familiar with. Since there are no known wild Brugmansia, we know that humans have been cultivating the plant intentionally for quite some time. Based on this fact, it is entirely possible that angel’s trumpets were being used as psychoactives in prehistoric times!

TRADITIONAL USES: Andean priests smoke the leaves of the tree in order to see the future and to diagnose diseases. The seeds are still used in the Andes to this day as an additive to Chicha, a psychoactive maize beer that is consumed during festivals and rituals. Many South American artifacts depict angel’s trumpet trees and flowers, but it is mostly impossible to determine which specific species are represented (Ratsch 1998, 94). The Chibcha of Colombia once gave Chicha, a maize beverage prepared with Brugmansia seeds, to the wives and slaves of dead nobles in order to cause a stupor before these individuals were buried alive with the corpses of their masters. Many Peruvian shamans still believe that ingesting Brugmansia species allows them to communicate with ancestors and to find treasures buried in graves (Voogelbreinder 2009, 105-106). Brugmansia intoxication is actually fairly common in the West, as young people seeking free and novel psychedelic experiences often intentionally consume parts of these plants. These ingestions often result in hospitalization, as the individuals are rarely capable of handling the intense state that the plant creates. In most cases there is full recovery of all normal function after a few days, but death may result if too much plant matter has been consumed (Voogelbreinder 2009, 105-106).

This plants/weed is growing along the creek.