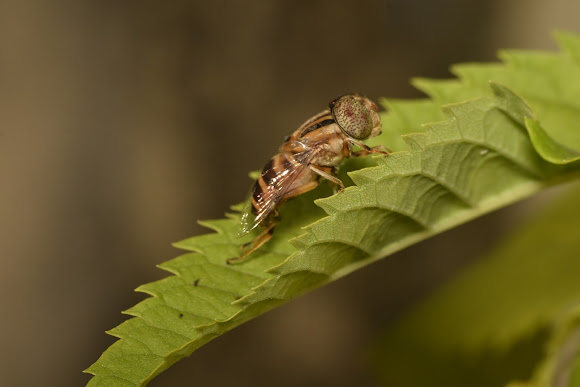 Over 100,000 species of flies live on earth. Flies lay their eggs on fruit, food, other animals and even rotting flesh. Their larvae are known as maggots. They look like bits of rice. Flies don’t have teeth. Instead, they have a long tongue called a proboscis, which sucks up food like a straw. Some flies drink nectar or blood. House flies like the food we eat. When a fly lands on your lunch, it vomits on the food. Acids in the vomit dissolve the food so the fly can suck it up. Disgusting!. A Horse fly is a type of insect and a member of the family Tabanidae (order Diptera), but more specifically are any member of the genus Tabanus. These stout flies, as small as a housefly or as large as a bumblebee, are sometimes known as greenheaded monsters; their metallic or iridescent eyes meet dorsally in the male and are separate in the female. Gad fly, a nickname, may refer either to the fly’s roving habits or to its mouthparts, which resemble a wedge-shaped miner’s tool. Adult tabanids are large flies with prominent compound eyes, short antennae composed of three segments, and wide bodies. In females, the eyes are widely separated but in males they are almost touching; they are often patterned and brightly coloured in life but appear dull in preserved specimens. The terminal segment of the antennae is pointed and is annulated, appearing to be made up of several tapering rings. There are no hairs or arista arising from the antennae. Both head and thorax are clad in short hairs, but no bristles are on the body. The membranous forewings are clear, uniformly shaded grey or brown, or patterned in some species; they have a basal lobe (or calypter) that covers the modified knob-like hindwings or halteres. The tips of the legs have two lobes on the sides (pulvilli) and a central lobe or empodium in addition to two claws that enable them to grip surfaces. Species recognition is based on details of head structures (antennae, frons, and maxillae), the wing venation and the body patterning; minute variations of surface structure cause subtle alterations of the overlying hairs which alters the appearance of the body.

Adult horse-flies feed on nectar and plant exudates, and some are important pollinators of certain specialised flowers. Both males and females engage in nectar feeding, but in addition to this, females of most species are anautogenous, meaning they require a blood meal before they are able to reproduce effectively. To obtain the blood, the females bite animals, including humans, while the males are harmless. The female needs about six days to fully digest her blood meal and after that, she needs to find another host. The flies seem to be attracted to a potential victim by its movement, warmth, and surface texture, and by the carbon dioxide it breathes out. The flies mainly choose large mammals such as cattle, horses, camels, and deer, but few are species-specific. They have also been observed feeding on smaller mammals, birds, lizards, and turtles, and even on animals that have recently died. Because their bite is irritating to the victim, they are often brushed off, and may have to visit multiple hosts to obtain sufficient blood. This behaviour means that they may carry disease-causing organisms from one host to another. Location - Rayagada, Odisha State, India