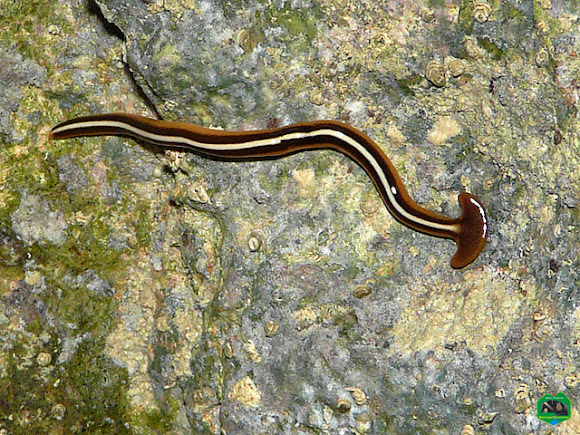 Description based on Bipalium kewense:The Shovel-headed Garden Worm, like other flatworms, does not have a respiratory or circulatory system, a skeleton, or an anus. The mouth, which also serves as the anus, is found near the middle of the body on the lower, or ventral, side. It has a protrusible muscular pharynx that is used as a feeding organ; this is attached to a three-branched intestine. Shovel-headed Garden Worms are carnivorous, feeding on earthworms, insects and insect larvae, and young snails and slugs. They detect their prey using chemical receptors found in a pit on the underside of the head. The head-waving allows the worm to hone in on the chemical cues emitted from its prey. Struggling prey are held close to the substrate and entangled in slimy secretions from the worm. The pharynx is protruded from the mouth and into the prey, which is reduced to small particles prior to digestion. The food particles are stored inside the body, and the worm can survive for many weeks, but shrinking in size, between meals. They are also capable of digesting their own tissues, such as the reproductive organs, for food when other reserves are depleted. Source: http://australianmuseum.net.au/Shovel-he...

Just found one of these in our backyard in South Texas 😊

Thanks for your comments, ya'al!

Wow, an auto-cannibalistic creature! Thanks for sharing.

Birding For Fun 10 years ago

When I was a little boy found very similar worms under some rocks in my house´s garden. Since then, I had never seen them again or know anyone who knew them. Thanks for spotting this, I can show them to my family now.