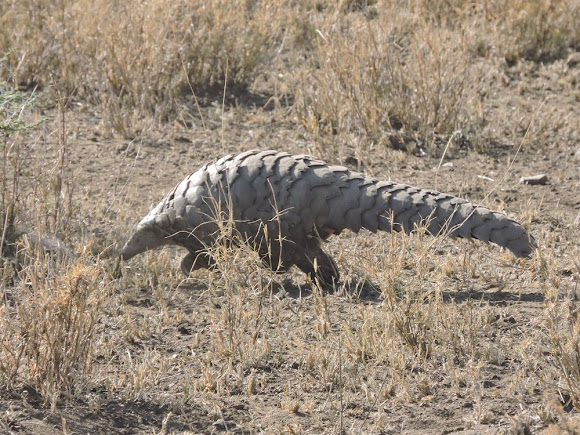 The ground pangolin (Manis temminckii), also known as Temminck's pangolin or the Cape pangolin, is one of four species of pangolins which can be found in Africa, and the only one in southern and eastern Africa. With the exception of the underside, it is covered in extremely hard scales composed of keratin, the same material that forms human hair and fingernails. When threatened, it usually will roll up into a ball thus protecting its vulnerable belly. The scales on the tail can also be used as blades to slash at attackers. The ground pangolin can grow to a length of about 1 m, with the tail typically between 30 and 50 cm. It has a disproportionately small head, powerful hindlegs, and small forelegs. Capable of walking on two legs, the ground pangolin walks on its hindlegs when searching for food while using its forelegs and tail for balance. Like other pangolin species it is largely nocturnal, although it is also entirely terrestrial, and usually found in savanna or open woodland. It is well adapted to a diet of ants and termites, possessing a keen sense of smell and a very long (up to 50 cm) sticky tongue that extends deep into its abdominal cavity. Although it is capable of digging its own burrow, the ground pangolin prefers to occupy those abandoned by warthogs or aardvarks or to lie in dense vegetation, making it even more difficult to observe. The ground pangolin is listed as Vulnerable by the IUCN Red List: “there is an inferred past/ongoing and projected future population reduction of 30-40% over a 27 year period (nine years past, 18 years future; generation length estimated at nine years) based primarily on ongoing exploitation for traditional medicine and bushmeat throughout the species' range and evidence of increased intercontinental trade to Asia. All eight extant pangolin species are now considered to be threatened with extinction, largely due to habitat loss and poaching for meat and traditional Chinese medicine.

Awesome spotting! Congrats on SOTD. Still on my bucket list after numerous trips to Africa and SE Asia. Going back to Africa in a few weeks, hopefully I spot one this time!

Extremely rare sighting, very impressive, some have this on their bucket list as most desired animal to see!

Great spotting Kibuyu,congrats on the well deserved SOTD and thanks for sharing

Awesome, one of my favorite animals. Nice spotting!

Congrats Kibuyu! This awesome snap of an awesome animal has earned you your first Spotting of the Day! Welcome to the community and thanks for sharing your gems from Tanzania. We hope to see many more from you!

Very cool creatures indeed! Wonder if there are any conservation/breeding programs out there to help.

Such a cool animal!