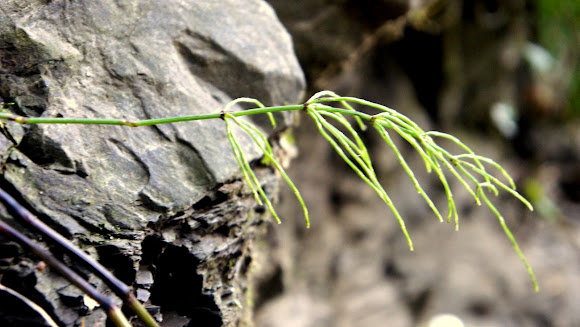 Equisetum species - horsetail family are Creeping, perenial, Branching rootstocks, rooted at the nodes. The Arial stems may be annual or Perennial, are cylindrical, fluted, simple or with whorled branches at the jointed nodes. The internodes are usually hollow. The Surfaces of the stems are covered with Silica. The Cones are terminal. Equisetum avense is a Perennial from creeping rhizomes, often forming large colonies; to 2 1/2 ft. Stems hollow, riged, jointed. Sterile stems green, with whorled branches ar nodes; leaves reduced to brownish, papery, toothed sheath around node; sheath with fewer then 14 teeth. Fertile stems brownish to whitish, with large "cone" at tip, formed by spore-producing scales; cone produced in early spring.

Meadow; Hedgerow; This spotting was made across a small stream.The plant prefers light (sandy), medium (loamy) and heavy (clay) soils and can grow in nutritionally poor soil.The plant prefers acid, neutral and basic (alkaline) soils..It can grow in semi-shade (light woodland) or no shade.It requires dry or moist soil.

Strobil (the fertile shoots in spring) - cooked and used as an asparagus substitute. They should be used when young but even so it is probably best to change the water, perhaps 3 - 4 times. One report says that they can be eaten raw, they are peeled and the shoot tip is discarded. It is said to be a very tedious operation and they should not be eaten raw in any quantity. Large quantities of the plant can be toxic. This is because it contains the enzyme thiaminase, a substance that can rob the body of the vitamin B complex. In small quantities this enzyme will do no harm to people eating an adequate diet that is rich in vitamin B, though large quantities can cause severe health problems.