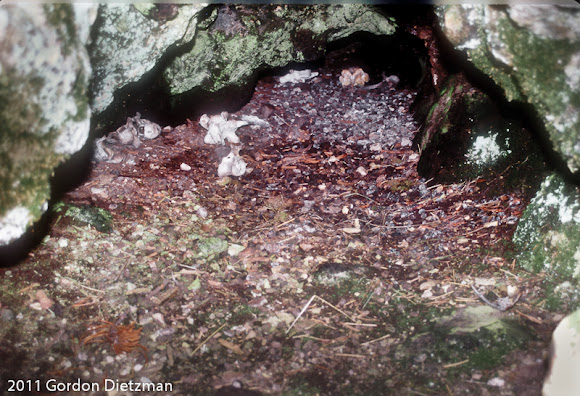 These large, aggressive bears on average weigh about 180–360 kilograms (400–790 lb) (coastal grizzlies can get much larger). Color ranges from blonde to black, but most are brown with grizzled tips on the end of the fur. Grizzlies tend to have a pronounced shoulder hump.

The North American population once ranged across the US Great Plains into the mountains and Pacific coastal plain northwards into Alaska and south into Mexico. Today, it is range is much more restricted to the mountains of northern US and north into Alaska.

I typically do not add spottings of signs of wildlife, but I thought that this photo may interest you since there are very few photos of the inside of a grizzly bear den. Grizzly bears typically dig a new den each year under the roots of a tree as old dens tend to collapse during spring snowmelt and summer rainstorms. This den is different as it was dug under a large rock outcropping with a stone ceiling and has been in use by generations of bears. I took this photo a number of years ago while taking a field course from the Yellowstone Institute (in Yellowstone National Park). We had hiked into the backcountry to find this den, whose location is well-known by Yellowstone park rangers and wildlife researchers. As we were standing outside the den discussing hibernation and bear behavior, the ranger in charge of the group looked at me and asked if I wanted to crawl into it. Really? Of course I did!! The entrance was remarkably small, but with camera and flash in hand and a flashlight stuck in my mouth to illuminate my way, I squirmed into the entrance and then down a short tunnel of less than 3 m. At the end of the tunnel was the sleeping chamber, which was only slightly wider and taller than the tunnel itself. I'm not sure what the bones are that you can see at the back of the sleeping chamber. They were vertebrae, but I couldn't determine from what animal. They may have been the remains of bear that had died in hibernation, but that is a surprisingly rare occurrence. They were too small to be elk and too large to be a mule deer or whitetail deer. I suspect they may have been from an elk calf. Since bears don't drag food into the den, I surmised that perhaps some other large predator had taken up residence, although fortunately they weren't at home while I was there. At any rate, I took several photos and then rather hurriedly squirmed back out the tunnel. The second photo is of a bear-scarred tree just outside the den. These photos were scanned from slides, so I apologize for the poor quality. I also don't remember the exact date. I know it was June, probably in 2004. I'm just guessing at the day.

Nice story Gordon, I've never seen
A grizzly bear or a grizzly bear den.
You must have been brave to go
In that den.

Haha! Maybe insane...grin. I suppose we're most concerned about those dangers with which we are less familiar. I tend to be quite nervous when in poisonous snake country and less so in bear country....

Great story Gordon - you were very brave (or insane???) to go in there!! The thought of trekking through forests with bears in them gives me the serious heebies... here in Australia we really only have snakes to worry about, and you have to be pretty unlucky to have an adverse encounter with one.