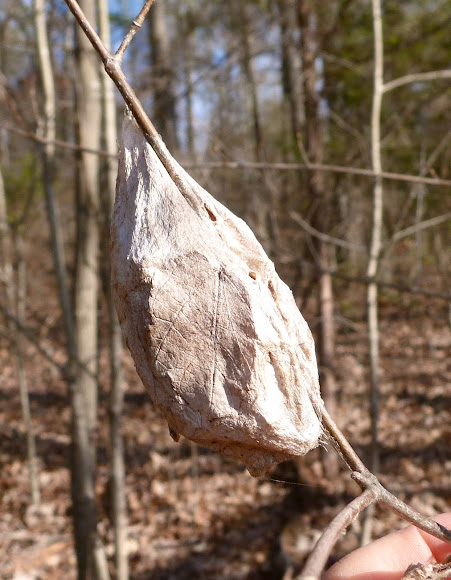 The Cecropia Moth is North America's largest native moth. It is a member of the Saturniidae family, or giant silk moths. Females with a wingspan of 160 mm or more have been documented. It is found as far west as the Rocky Mountains and north into the maritime provinces of Canada. The larvae of these moths are most commonly found on Maple trees, but they have been known to feed on Wild Cherry and Birch trees among many others. The life cycle of the moth is much like any other saturniidae species. It lays oval-shaped, light brown eggs on the leaves of the host plant. When the eggs hatch, small black and hairy caterpillars emerge (first instar), and eat their eggshells. Sometimes the newly hatched caterpillars have yellow bristles, which darken in a few minutes. As the caterpillars age, they molt 4 times. The second instar is yellow-green with black spots and spiny orange, yellow, and blue knobs. The third and fourth instars have smaller spines, and are similar to each other. The fifth instar is a whitish color with bright yellow, blue, and red knobs. The caterpillars feed heavily on their host plant and can grow up to five inches long. They then spin cocoons of brown silk, usually wrapped in leaves of the host plant. They then pupate inside the two-layered cocoon. There is only one brood per year, the cocoon overwintering and emerging in spring. When the adults eclose, they have to pump fluid into their wings to extend them. The females emit pheromones at night, which the male can detect with its large, plumose antennae. Males can fly for miles in order to reach a female. The moths mate, and the female spends the remainder of her life laying eggs, while the male may mate several more times. Because the adult moths do not have mouth parts they are unable to eat. As a result, the lifespan for an adult Cecropia moth is generally only 7 to 10 days in the wild, perhaps a little longer or shorter, depending on how much movement the moth makes. For instance, if temperatures are cooler, the moth may remain mostly inactive, which will increase its lifespan. In captivity, this lifespan can be extended to about a month by placing the moth in the fridge directly after it hatches and its wings are dry.

I've brought this 4" cocoon home so hopefully will get to see the moth when it ecloses.

Yes, I'm thinking of buying a small aquarium off of craiglist to keep me cocoons in. I've only got 2 at the moment, this & a polyphemus but I was thinking it would be cool to bring more indoors & get to see the moths.

I have to get some type of netting for mine. I just was talking about this a few minutes ago. Spring will be here earlier this year. I hope I can get a photo of these wonderful creatures. Great find!