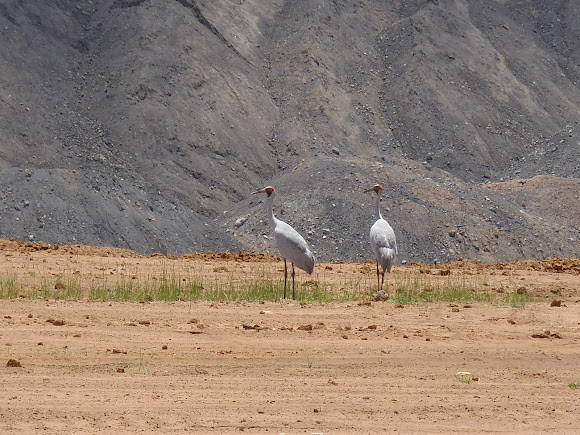 The full-grown Brolga is a tall, mid-grey to silver-grey crane, 0.7–1.3 m (3.3–4.3 ft) high, with a wingspan of 1.7–2.4 m (5.6–7.9 ft), and a broad red band extending from the straight, bone-coloured bill around the back of the head. Juveniles lack the red band. Adult males average at a little under 7 kg (15 lb), females a little under 6 kg (13 lb). The weight can range from 3.7 to 8.7 kg (8.1-19.2 lb). The Brolga can easily be confused with the Sarus Crane, however the latter's red head colouring extends partly down the neck while the Brolga's is confined to the head. Additionally, in Australia the range of the Sarus is limited to a few scattered localities in northern Australia, compared to the more widespread distribution of the Brolga.

Brolgas are widespread and often abundant in north and north-east Australia, especially north-east Queensland, and are common as far south as Victoria. They are also found in southern New Guinea and as rare vagrants in New Zealand and the northern part of Western Australia. The population is estimated at between 20,000 and 100,000. The International Crane Foundation began a captive breeding population with three pairs of wild Brolga that were captured in 1972. Brolga are non-migratory but do move in response to seasonal rains.