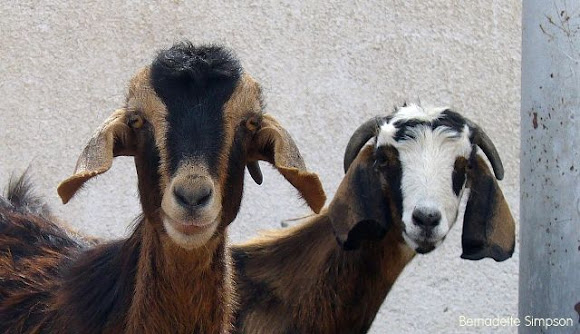 Ten different breeds of goats can be found in Egypt. The Barki or Sahrawi is the smallest local breed of goat. The Zaraibi is father to the popular Anglo-Nubian goat bred for it's healthy milk. Other local breeds include the Sharkawi, Wahati, and Black Sinai. The Saidi and Egyptian Baladi goats – like the ones pictured here - however, are the most abundant. (Baladi means "local" in Arabic.)

Goats are raised by my Egyptian and Bedouin neighbors. The goats are released in the early morning and allowed to roam the neighborhood/village streets until late afternoon when they return - sometimes called, sometimes rounded up, but often on their own - to their owner's gate. Many Bedouin take their goat herds to the mountains in the spring where they can graze on fresh green herbs. Or they collect the fresh herbs and deliver it to the goats. Otherwise, the goats eat scraps - and trash. As our town, and the region in general, continues to develop, their more natural habitat is lost.