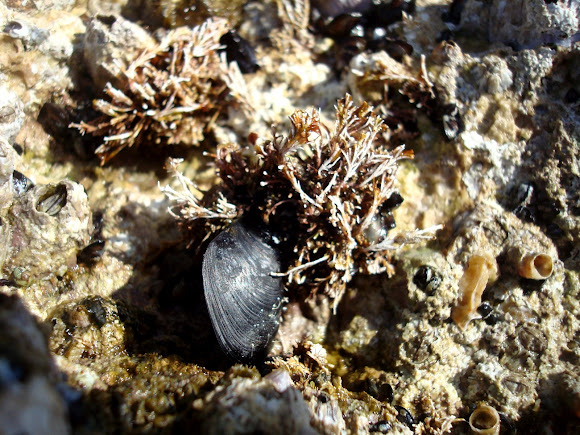 Blue mussels consist of a group of at least 3 closely related taxa of mussels, known as the Mytilus edulis complex. Collectively they occupy both coasts of the North Atlantic and Mediterranean, and North Pacific (in temperate to polar waters), as well as coasts of similar nature in the Southern Hemisphere. The shape of the shell is triangular and elongate with rounded edges. The shell is smooth with a sculpturing of fine concentric growth lines but no radiating ribs. The shells of this species are purple, blue or sometimes brown in color, occasionally with radial stripes. The outer surface of the shell is covered by the periostracum which as eroded, exposes the colored prismatic calcitic layer.

Blue mussels are boreo-temperate invertebrates that live in intertidal areas attached to rocks and other hard substrates by strong (and somewhat elastic) thread-like structures called byssal threads, secreted by byssal glands located in the foot of the mussel.

Blue Mussels are semi-sessile, have the ability to detach and reattach to a surface allowing the mollusk to reposition itself relative to the water position. Because they are edible and relatively insensitive to the change of the environment around them, blue mussels are subject to commercial use and intense aquaculture.