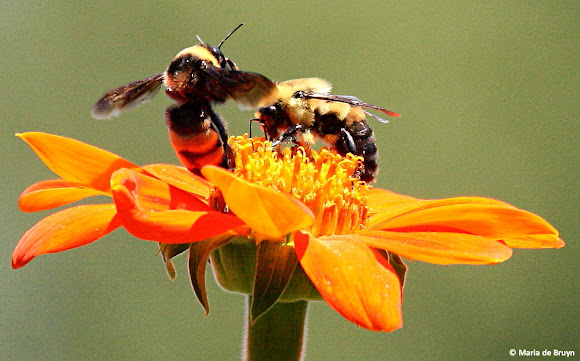 The common eastern bumble bee has black hairs on its head, abdomen and legs. The center of its body, between the first two sets of legs is called the thorax. On the common eastern bumblebee the thorax is yellow. Bumble bees have fur all over their bodies; these hairs collect and trap pollen which the bees carry from one bloom to another. This bumble bee has unusually large colony sizes and for this reason may be at some competitive advantage. It is a pollinator of flowers and numerous fruit and vegetable crops, including tomatoes, blueberries and cucumbers.

This is the most often encountered bumble bee across much of eastern North America, ranging from Ontario to Maine and south to Florida. It is common on the Atlantic coast and much less common near the western edge of its range (eastern ND, central NE, western KS, eastern TX). It has an unusually long flight season and thrives across a wide range of habitats and climates ranging from the cold temperate zone to the warm subtropics, being found in intensively farmed areas, suburbs, and highly urban areas.

I'm glad you were able to determine the species! You're most welcome. Again, great shot!

Hi Cindy, I looked at some other photos of that shooting and think that the brownish tint is caused by shadow of the wings. So I went with the Common Eastern bumble bee. Thanks so much for the help in correcting the ID!

Hi,Cindy. I debated about this and compared it to other photos I have that I am pretty sure are bumblebees. I will check in to this again later in the day as you know more about insects than I do. Thanks!.

Great shot! I have you an ID of a Bumble Bee. I'm basing this specific species on the last strip of yellow where it meets the black on the abdomen. It appears to have a tinge of brown. This could be a photographic fluke in which case, I'd give you the ID of the Common Eastern Bumble Bee (Bombus impatiens) http://bugguide.net/node/view/56797 Maybe you or others can help determine which.

Thank you Shanna and Misako!