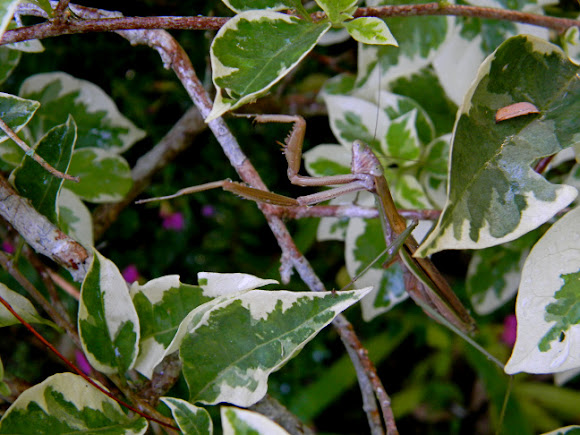 Unidentified praying mantis. Mantodea (or mantises) is an order of insects that contains approximately 2,200 species in 15 families worldwide in temperate and tropical habitats. The closest relatives of mantises are the orders Isoptera (termites) and Blattodea (cockroaches), and some authorities lump these into a single order. They are sometimes confused with phasmids (stick/leaf insects) and other elongated insects such as grasshoppers and crickets. Praying mantises named after their "prayer-like" stance are sometimes called "preying" mantises because they are predatory. Mantises have two grasping, spiked forelegs ("raptorial legs") in which prey items are caught and held securely.

Spotted on an ornamental variegated Bougainvillea in a large semi-urban yard and garden adjacent to a disturbed patch of remnant forest.