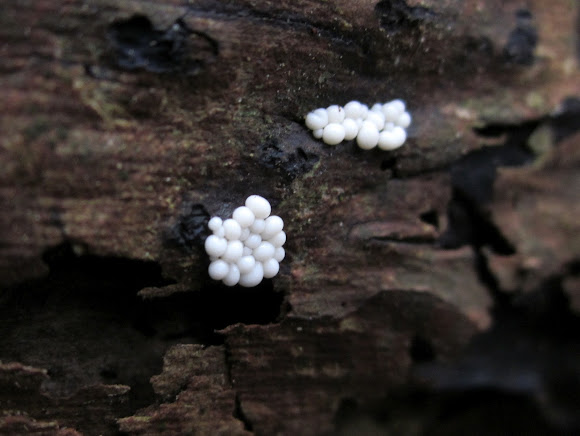 Sporocarps gregarious or crowded, sessile or with a short, stout, black stalk, rarely subplasmodiocarpous. Sporotheca shining yellow, globose, obovoid or somewhat elongate, 0.5-0.9 mm wide. Peridium membranous. Hypothallus broadly expanded, inconspicuous. Capillitium of simple or rarely branched elaters, 3-5 µm diam., bearing 2(-3) irregular spiral bands, these prominent and in places remote, the apices often swollen behind the conical tip. Spore-mass yellow to orange-yellow. Spores dull pale yellow, verruculose, 12-14 µm diam. Plasmodium white ( http://www.discoverlife.org/mp/20q?searc...), ( http://slimemold.uark.edu/fungi/default.... ) ---- These were some/few specimen of the spotting, i made before, took them (i take just some specimen of the whole patch, when there aren't enough {say 1-2 specimen}, then i search for other patches in a narrow circle, otherwise i leave them and come back) with me home to, Tried to identify them further with the microscope.!!