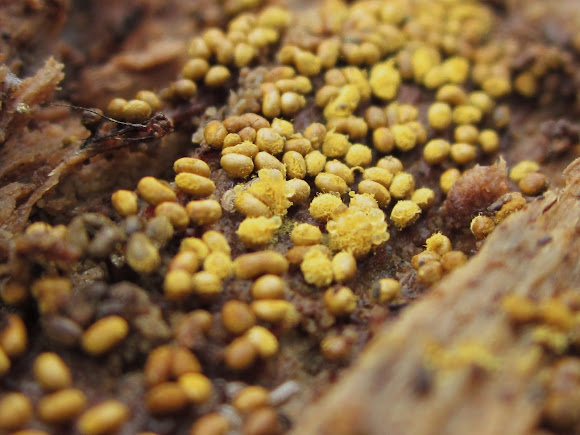 Sporocarps gregarious or crowded, sessile or with a short, stout, black stalk, rarely subplasmodiocarpous. Sporotheca shining yellow, globose, obovoid or somewhat elongate, 0.5-0.9 mm wide. Peridium membranous. Hypothallus broadly expanded, inconspicuous. Capillitium of simple or rarely branched elaters, 3-5 µm diam., bearing 2(-3) irregular spiral bands, these prominent and in places remote, the apices often swollen behind the conical tip. Spore-mass yellow to orange-yellow. Spores dull pale yellow, verruculose, 12-14 µm diam. Plasmodium white ( http://www.discoverlife.org/mp/20q?searc...), ( http://slimemold.uark.edu/fungi/default.... ) ---- take a real good look at the first picture, relativly at the center, but a bit to the right side, is a sporangia, which has little bubble/balls on it, now have i seen at some docus, that some myxomycetes ooze water, which is too much. but that looks weird/intresting !

yes a little, or as the discarded skin of a reptile