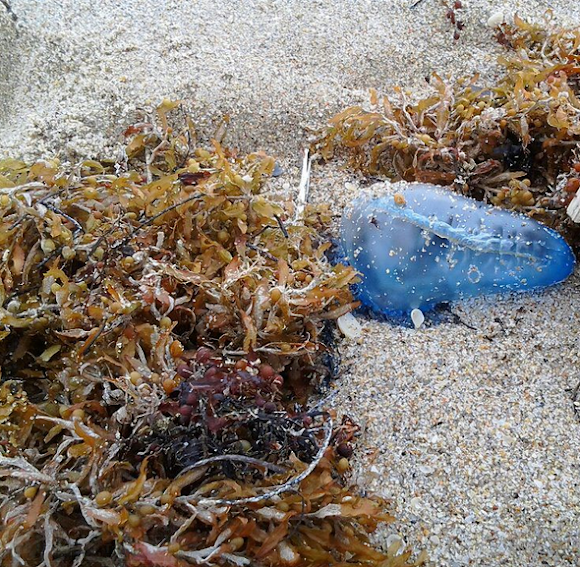 The Portuguese Man o'War isn't a true jellyfish- rather, these beauties are siphonophores. Jellyfish are a single creature, but these guys are a colony of organisms made up of tiny individuals called zooids. The Portuguese man o' war is composed of four types of polyp, all which perform different tasks. Pneumatophores enable the organism to float. Gonozooids aid in reproduction. Gastrozooids are the feeding polyps. Dactylozooids make up defense. The tentacles of a Man o'War contain cnidocytes, aka stinging cells unique to the phylum Cnidaria. Each cnidocyte has a bulblike structure, called a nemotocyst, which houses an oiled, barbed thread. When triggered by touch or chemicals, the thread explodes outward and pierces skin. I've heard it can be quite painful!

This little guy was put back into the surf. Although I'm unsure if Man o'War can survive out of water (however my guess is a negative), hopefully it can be a snack for a hungry turtle.

EsEverde- Thank you so much! :D

Just wanted to let you know I really like your tumblr page, keep on the good job!