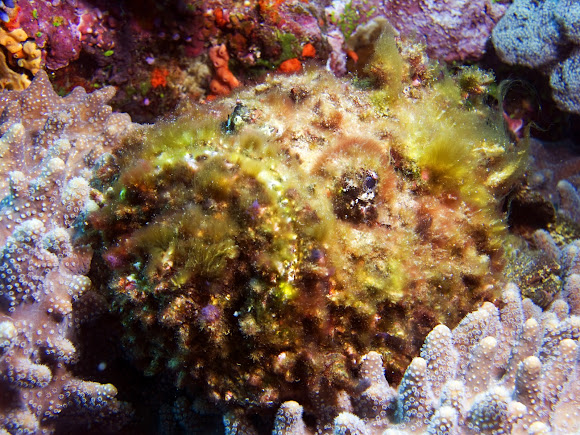 This is the most venomous fish in the world, according to sources. This well camouflaged fish has an upward curved mouth, and blends quite well with its surroundings. Eyes protrude from either side at the top of the head, and are the only other distinguishing features of the front of this fish…as pictured. This spotting was about 40 cm in length.

This spotting was in Fiji, off the island of Taveuni. It was in a depth of 13 meters, in a coral reef wedged in some hard coral.

This (fortunately) is not an aggressive fish. It has 13 poisonous spines in its dorsal fin area, which inject poison if pressed down upon by a hand or foot. The spines are more of a defense mechanism than an aggressive mode of attack, and are not used to disable prey. With its camouflage protection, this fish sits quietly on the bottom and ambushes its prey by in a split second opening its mouth. The suction caused by the sudden opening of the mouth draws the prey in, which is then swallowed whole. The second photo above illustrates how well camouflaged the stonefish looks from the prey’s vantage…more like a rock covered with algae. The pain from a sting is extreme for hours, and it is reported that paralysis, shock and possibly death can result. In more bad news…this fish can live out of the water for up to 24 hours. In Australia, to the west of Fiji, there are reports of people stepping on these well-concealed fish on the beach, thinking it to be a rock. While sharks, and larger sea creatures are considered dangerous…many times it is the smaller creatures easily concealed that are a bigger threat.

Thanks, Danielle, Triggs and Polilla. This one made my day!

Congratulations Jim! This fantastic spotting and great notes have earned you a Spotting of the Day!

Great spotting! These guys can be ridiculously hard to spot sometimes. Brilliant images and informative notes. Thank you for sharing these Jim.