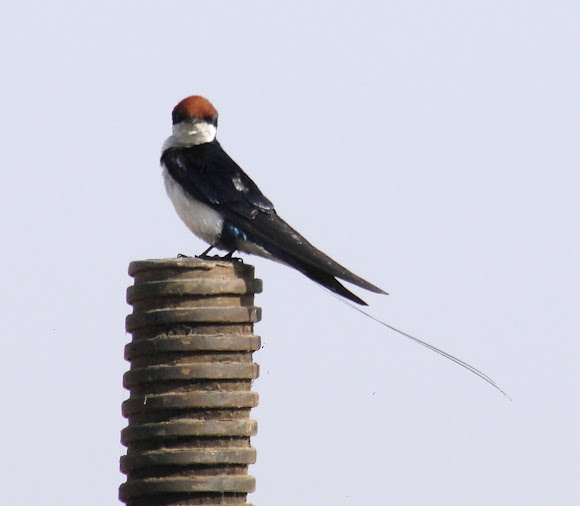 This bird is found in open country near water and human habitation. Wire-tailed Swallows are fast flyers and they generally feed on insects, especially flies, while airborne. They are typically seen low over water, with which they are more closely associated than most swallows. The neat half-bowl nests are lined with mud collected in the swallows' beaks. They are placed on vertical surfaces near water under cliff ledges or more commonly on man-made structures such as buildings and bridges.

This striking species is a small swallow at 14 cm in length. It has bright blue upperparts, except for a chestnut crown and white spots on the tail. The underparts are white, with darker flight feathers. There is a blue mask through the eye. This species gets its name from the very long filamentous outermost tail feathers, which trail behind like two wires. Sexes manifest similar appearances, but the female has shorter "wires". Juveniles have a brown crown, back and tail.

Nice shots!! Such a beautiful swallow!!