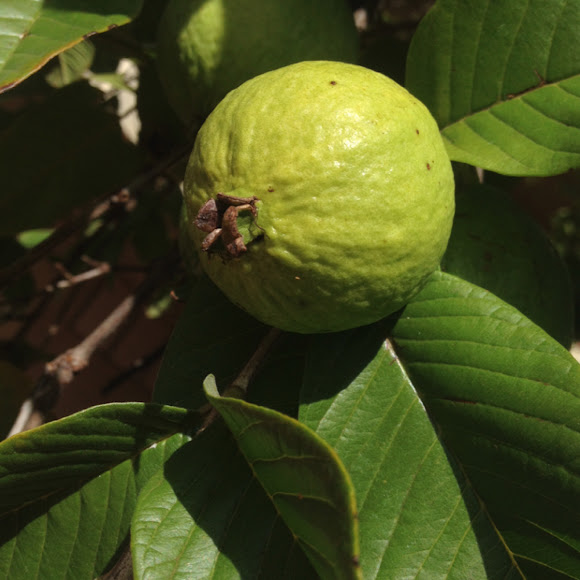 Guava are plants in the Myrtle family (Myrtaceae) genus Psidium, which contains about 100 species of tropical shrubs and small trees. Psidium species are used as food plants by the caterpillars of some Lepidoptera, mainly moths like the Ello Sphinx (Erinnyis ello), Eupseudosoma aberrans, E. involutum, and Hypercompe icasia. Mites like Pronematus pruni and Tydeus munsteri are known to parasitize the Apple Guava (P. guajava) and perhaps other species. The bacterium Erwinia psidii causes rot diseases of the Apple Guava. The fruit is not only relished by humans, but by many mammals and birds as well. The spread of introduced guavas owes much to this fact, since animals eat the fruit and disperse the seeds in their droppings. In several tropical regions, including Hawaii and Florida, some species (namely Strawberry Guava, P. littorale, and to a lesser extent Apple Guava) have become invasive species. On the other hand, several species have become very rare due to habitat destruction and at least one (Jamaican Guava, P. dumetorum), is already extinct. Guava wood is used for meat smoking in Hawaii and is used at barbecue competitions across the United States. In Cuba and Mexico the leaves are used in barbecues. Since the 1950s, guavas – particularly the leaves – have been the subject for diverse research on their constituents, pharmacological properties and history in folk medicine. Most research, however, has been conducted on apple guava (P. guajava), with other species remaining unstudied. From preliminary medical research in laboratory models, extracts from apple guava leaves or bark are implicated in therapeutic mechanisms against cancer, bacterial infections, inflammation and pain. Essential oils from guava leaves display anti-cancer activity in vitro. Guava leaves are used in folk medicine as a remedy for diarrhea and, as well as the bark, for their supposed antimicrobial properties and as an astringent. Guava leaves or bark are used in traditional treatments against diabetes. In Trinidad, a tea made from young leaves is used for diarrhea, dysentery and fever.

They are native to Mexico, Central America, and northern South America. Guavas are now cultivated and naturalized throughout the tropics and subtropics in Africa, South Asia, Southeast Asia, the Caribbean, subtropical regions of North America, Hawaii, New Zealand, Australia and Spain.