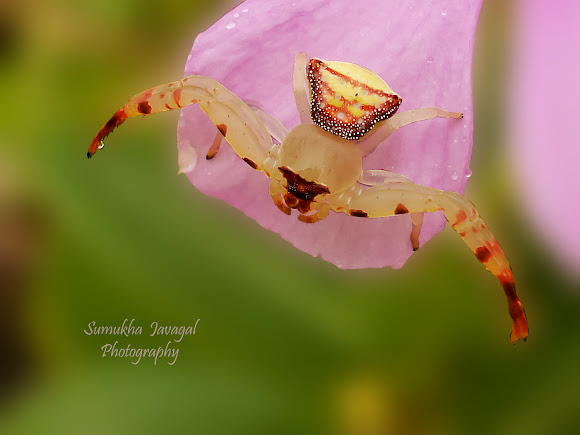 Found this beautiful and colorful crab spider in a flowering plant in my home.. These spiders are brightly coloured. The cephalothorax is quite low but raised near the middle with flat cephalus sloping slowly downwards to a wide carina at the front and sloping more steeply on the sides and thorax. The thorax is quite wide as long as broad with its anterior margin bearing pointed horns. The abdomen is flat on top and is obliquely truncated at the front and rear with a pentagonal shape. The sides diverge from the carinate anterior edge to two distinct rounded tubercles which lie at the limit of the flat upper surface. From the tubercles the sides drop away very steeply and converge to the spinnerets. Legs are smooth, the first and second pairs much robust than the third and fourth. Ventral side of the tibia and metatarsal of the first and second pairs bear spines.

Thanks Jolly..:-) This is a fully grown specimen of this species. The juveniles doesn't have the markings on their legs as compared to the fully matured ones.

It is indeed a beauty Carol..! This was a large crab spider when compared to other crab spiders that i have found..:-)

I have finally found an ID for this one and i have updated the ID. The ID with a picture of it was found in "Spiders of India" book by P.A. Sebastian and K.V.Peter.

try this one Thomisus spectabilis....look it up on the net and see what you think

that's the closest i can get. sorry.

Thank u Gordon Dietzman.. I wil try to find the ID for this..:)

I spent some time trying to figure out the ID, but didn't find anything. It's a great photo though. I hope you can ID it it further.

Thank u very much KarenL..:)