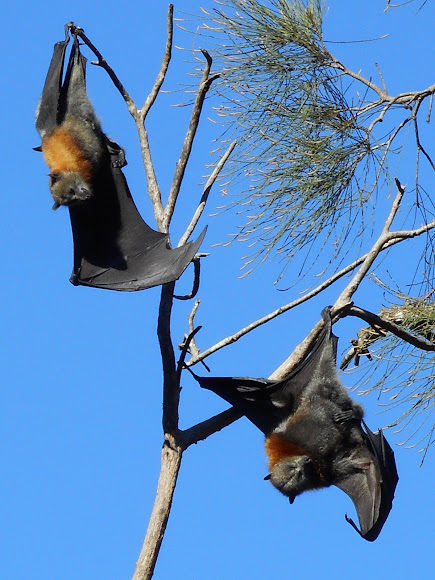 It's 3 years since I've visited this colony - http://www.projectnoah.org/spottings/360... and I was horrified only a couple of days ago to see the camp devoid of any bats. I don't know where they were, but 2 days later and they're back. This colony looks very healthy. Back in 2012 when I first saw this colony, it was very small and stressed due to relocation and hot weather. 4 years later, and the colony is massive. Here's the original spotting - http://www.projectnoah.org/spottings/228...

Roosting in Casuarina trees and other natives, in a large colony at North Avoca on the NSW Central Coast. Situated near a large coastal lagoon.

In NSW, this species was listed as vulnerable under the Threatened Species Conservation Act 1995.

Oh wow, thanks very much for the SOTD. Cheers Ashley, Pradeep, and Rob. These are amazing animals, and I've enjoyed watching them these past few years.

Congratulations for the SOTD!

Congrats Neil, your Flying Fox colony has been selected as Spotting of the Day!

Thanks, Daniele. They are fascinating animals. One thing that is obvious to me is the tree foliage that has been damaged over time. I think they have become more accustomed to people as well, having taken up a permanent location where there are constant passers-by.