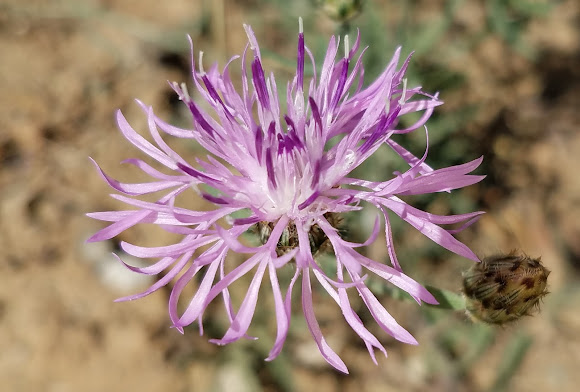 This biennial or short-lived perennial plant usually has a stout taproot and/or pubescent stems when young. It has deeply lobed leaves and vibrant pink flowers. The sepals have black tips that look like spots, which is the origin of its common name. An invasive weed here in North America. It is native to Central Europe, east to central Russia, Caucasia, and western Siberia.

Spotted in a man made meadow west of Roslyn, Washington. The plant grows on stream banks, pond shorelines, sand prairies, old fields and pastures, roadsides, and along railroads, and many open, disturbed areas.

Spotted knapweed likely spread to North America in an alfalfa shipment. It was first recorded in Bingen, Klickitat County, Washington in the late 1800s; by 1980, it had spread to 26 counties in the Pacific Northwest. In the year 2000 it was reported in 45 of the 50 states in the US. Spotted knapweed primarily affects rangelands of the northwest United States and Canada. A 1996 study estimated the direct plus secondary economic impact of spotted knapweed in Montana to be approximately $42 million annually. When spotted knapweed replaces native grasses, soil erosion and surface runoff are increased, depleting precious soil resources.(Wikipedia)