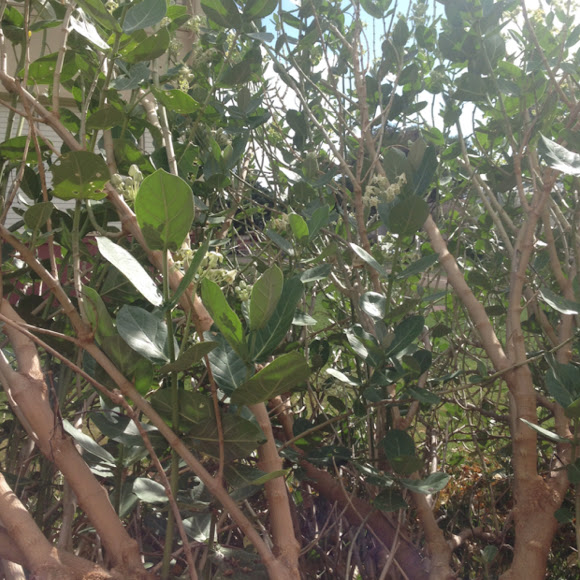 It is a large shrub growing to 4 m tall. It has clusters of waxy flowers that are either white or lavender in colour. Each flower consists of five pointed petals and a small, elegant "crown" rising from the centre, which holds the stamens. The plant has oval, light green leaves and milky stem. The latex of Calotropis gigantea contains cardio glycosides, volatile fatty acids and calcium oxalate. The flowers last long, and in Thailand they are used in various floral arrangements. They were also supposed to be popular with the Hawaiian Queen Liliuokalani, who considered them as symbol of royalty and wore them strung into leis. While in Cambodia, they are used in funerals to decorate the urn or sarcophagus and the interior of the house holding the funeral. Calotropis is used as a traditional medicinal plant with unique properties.[3] Traditionally calotropis is used alone or with other medicinals (Caius 1986) to treat common disease such as fevers, rheumatism, indigestion, cough, cold, eczema, asthma, elephantiasis, nausea, vomiting, diarrhea (Das 1996). According to Ayurveda, the dried whole plant is a good tonic, expectorant, depurative, and anthelmintic. The dried root bark is a substitute for ipecacuanha. The root bark is febrifuge, anthelmintic, depurative, expectorant, and laxative. The powdered root used in asthama, bronchitis, and dyspepsia. The leaves are useful in the treatment of paralysis, arthralegia, swellings, and intermittent fevers. The flowers are bitter, digestive, astringent, stomachic, anthelmintic, and tonic (Agharkar 1991; Warrier et al. 1996). Calotropis is also a reputed Homoeopathic drug (Ghosh 1988; Ferrington 1990). The milk obtained from the leaves and bark are useful in treating corn on skin permanently. Calotropis yields a durable fiber (commercially known as Bowstring of India) useful for ropes, carpets, fishing nets, and sewing thread. Floss, obtained from seeds, is used for stuffing purposes. Fermented mixture of Calotropis and salt is used to remove the hair from goat skins for production of "nari leather" and of sheep skins to make leather which is much used for inexpensive book-binding (Singh et al. 1996). Fungicidal and insecticidal properties of Calotropis have been reported (Ganapathy and Narayanasamy 1993). Allelopathic effects of Calotropis[4] on different agricultural crops have not been well studied. Extracts of different plant parts viz. root, stem, leaf, and stem+leaf of Calatropis affect germination and seedling vigor of many agricultural crops have been reported (Oudhia and Tripathi 1997, 1999; Oudhia et al. 1997, 1998a,b). However, extracts of Calatropis failed to produce any detrimental effects on weeds such as Chenopodium album, Melilotus alba, Melilotus indica, Sphaeranthus indicus, and Phalaris minor (Oudhia and Tripathi 1997).