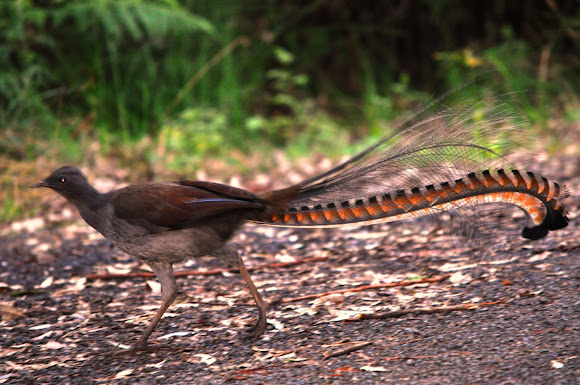 Australia's stunning Lyrebirds are not as numerous as pre-settlement, adult males are the ones that display a beautiful tail assembly and mimic just about everything (mostly the bird species within their range). Grey/brown plumage lighter grey underneath, rufous/grey wings, tail feathers consist of dark thick general tail, when breeding the tail includes fine filaments of white with two lyre-shaped 'fronds' striped copper on each side from tail base. Pheasant-like in appearance.

Have you heard about their strange calls?
...well here they are https://www.youtube.com/watch?v=e5Zdb-lQ...

Thanks LeanneG. Plans already being put together for our next 'expedition' into the mountains again in about 6 months time for lyrebird breeding season.

Excellent spotting. I've never been this fortunate to get so close. Here's a nice little video I found on NG. http://video.nationalgeographic.com/vide...

thnx Kd. Seems like a double treat with the echoing!! Something not all of us are able to experience!

Thanks, I'll give that recording thing a try! It is amazing to hear especially in the mountains and valleys as it echoes.

Wonderful kdpicturemaker! Sorry to hear about the decrease in song content. For those who have never heard this awesome bird it would indeed be great to include some of your recordings. Project Noah can't host sound but if you're able to turn your recordings into a video, you could actually upload it here as part of the same series; you can have one video per spotting. The video must be first uploaded to Youtube or Vimeo.

Thankyou for your comments and admiration of the beautiful lyrebird. As we research we are recording sounds of them. It is sad every time we visit the area that the numbers are dropping each time, also the song content has less and less every year, which means other birds are also disappearing.

marvelous kd. Maybe you can include an audio of the sounds it mimics? Just a request on my part.
What a lovely tail!

Oh....another wonderful picture of that fantastic bird!!
When I was little some of the tales (Children Stories) I was told, had Lyrebird in them... : )