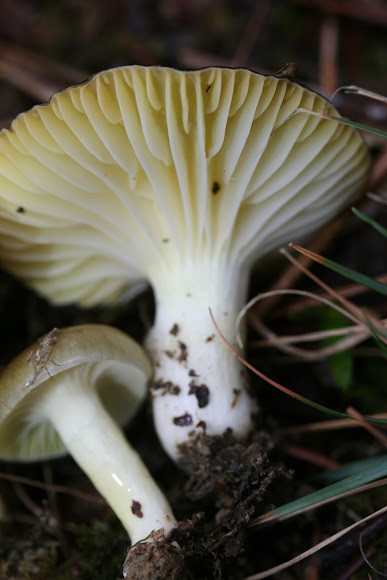 Group of waxcaps growing in moss and soil in a clearing at the edge of a primarily coniferous forest (with some hardwoods). Pileus is planar to depressed (in center) and golden brown in color with a darkened center. Each specimen is covered in a thick layer of clear slime. Gill surface is decurrent and white to pale olive-yellow with regularly spaced lammelulae. Stipe is white in color and wet to slimy in texture. Spore print is white, and odor is indistinct to pleasant (flowery). Hygrophorus hypothejus is commonly known as The Herald of Winter as it often makes an appearance in late autumn or around the first frosts of the year. It is often associated with coniferous forests.

Growing in moss and soil in a clearing at the edge of a primarily coniferous forest (with some hardwoods).

Thank you, Christine :) I love that one too!