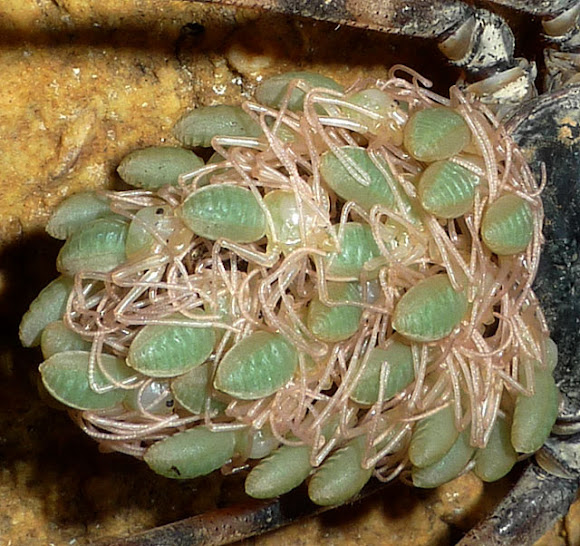 The characteristic trait that gave the whip spiders their name is the extremely elongated pair of first walking legs, which in contrast to the situation in spiders cannot be used for locomotion. An elongation of the first walking leg pair also occurred in the Uropygi, but by far not in the same degree as it is the case in the whip spiders. The perpetual motion of the first pair of elongated walking legs may remember of the slash of whips (Weygoldt, 2000). Also characteristic for whip spiders is the presence of raptorial spined pedipalps, that can attain a considerable length in many species; raptorial spine pedipalps can also be found in the Uropygi. One of the most prominent traits that distinguish the whip spiders from the Uropygi is that the latter possess a “tail“ that consists of an extremely elongated multisegmented telson, whereas the whip spiders do not (Weygoldt, 2000). -http://www.panarthropoda.de/sub/allgemeines/geisselspinnenen.php

Wow! This is fantastic! Great shot!

Do not surprise with Mission pictures.. Its your own spotting is used for this Mission... congrats.. your spottings is really great for me encouraged to form a important Mission...
http://www.projectnoah.org/missions/1116...

Yes.. this look to be Great Momma as seen here...
http://www.southcarolinaparks.com/things...

Thanks Atul & Apple... and thanks also ,Ashish, for pointing out about the American Wolf Spider, there are some gnarly photos from Google Images.

Great spotting! Very creepy but amazing at the same time!

this is super stuff!

TY ya'al! For a little humor, when we use this photo during lectures, we say, "To find out how many babies she's carrying... you count the number of legs and divide by 8."