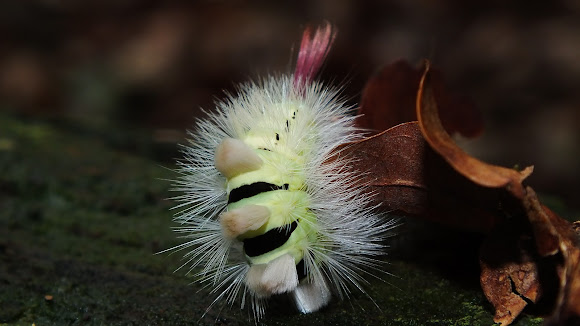 Wingspan 50-70mm. A large, rather hairy-looking moth. Adults are usually pale greyish-white, although some individuals are darker. The male forewings have a darker central area bounded with darker, wavy crosslines. Females have paler forewings marked with three distinct, wavy crosslines. There are a series of dots along the outer margin of the forewings in both sexes. The hindwings are pale grey in males, and near white in females. The larva is very distinctive, similar to that of the Dark tussock, but is generally greenish or yellow, with four conspicuous tufts of yellow hairs. It feeds on a range of deciduous shrubs and trees.

Found mainly in the damper parts of woodland. Adults are attracted to light in small numbers, especially males, which are more frequently encountered than females. The larvae can be found from July until September on birch, oak, hazel and possibly other trees. It overwinters as a pupa.

Thank you, Leuba. In the reference you can see which sources I used.

Jae, I meant to say could you please state source of your text in your notes/description- e.g. Wikipedia. Thanks

Nice shots Jae - I like the stiff pink tuft !