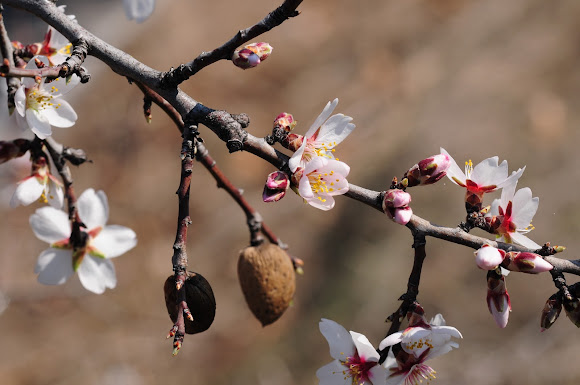 The spring is coming! The almond is a small deciduous tree, growing 4–10 metres in height, with a trunk of up to 30 centimetres in diameter. The young twigs are green at first, becoming purplish where exposed to sunlight, then grey in their second year. The leaves are 3–5 inches long, with a serrated margin and a 2.5 cm petiole. The flowers are white or pale pink, 3–5 cm diameter with five petals, produced singly or in pairs before the leaves in early spring.

Almond tree is a species of tree native to the Middle East and South Asia. Almond is also the name of the edible and widely cultivated seed of this tree. This one was observed at the edge of a local road

Almonds begin bearing an economic crop in the third year after planting. Trees reach full bearing five to six years after planting. The fruit is mature in the autumn, 7–8 months after flowering. Spanish name: Almendro

No Emma, the tree was at the edge of local road, close to my working place. I live downtown in Madrid but here they are very common in gardens. Do not know what they do with the excess production

Arlanda,is this in your garden?You could store the excess almonds .So it won't be a problem if you have a big yield.
I do not have the patience to wait for it to grow. Otherwise we could plant so many trees in California in our backyard. Our lemon tree right now is over flowing. Just don't know what to do with it. Made pickles,made juice,distributed in the neighborhood. You should plant trees only if you have some mass scale use for it. That is my experience with our apple and lemon.and we have one of each only.

We also use it for cooking, as a sauce thickener sort of

The raw fruit of the almond is tasty too.