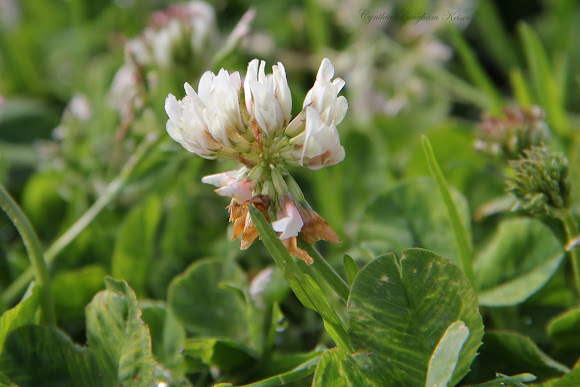 "It is low growing, with heads of whitish flowers, often with a tinge of pink or cream that may come on with the aging of the plant. The heads are generally 1.5–2 cm wide, and are at the end of 7 cm peduncles or flower stalks. The leaves, which by themselves form the symbol known as shamrock, are trifoliolate, smooth, elliptic to egg-shaped and long-petioled. The stems function as stolons, so white clover often forms mats, with the stems creeping as much as 18 cm a year, and rooting at the nodes." - Wikipedia

Growing in a grassy area of Kit Carson park

This plant is not native to California. "The fresh plants have been used for centuries as additives to salads and other meals consisting of leafy vegetables. They are not easy for humans to digest raw, however, but this is easily fixed by boiling the harvested plants for 5–10 minutes. Dried flowerheads and seedpods can also be ground up into a nutritious flour and mixed with other foods, or can be steeped into a tisane. White clover flour is sometimes sprinkled onto cooked foods such as boiled rice. When used in soups, the leaves are often harvested before the plant flowers. The roots are also edible, although they are most often cooked firsthand." - Wikipedia