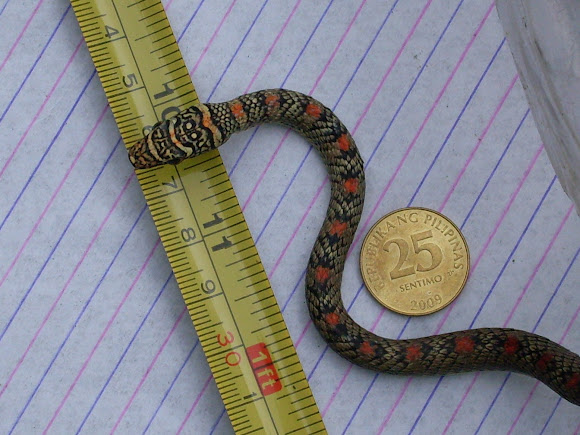 This snake is about 50 cm long , Im sure its young and cannot master its craft of gliding yet. It falls down beside my father while tending our garden, that's why he picked it up and we took a picture. A philippine coin and a measuring tape was place beside it to give an idea of its size. We are cautious it must be venomous at first so my father wore a glove, but I found out on a research later that its harmless. I cannot determine the exact scientific name as it differs in appearance or pattern with other Chrysopelea species Ive seen in the web.

we learned that its arboreal and feeds on insects and smaller lizards and frogs.

This specimen was released after we take its picture.

That is one gorgeous snake, great pattern and colors, it is nice it is harmless. Thank you for sharing, shekainah d. alaban.

Beautiful little snake you have there!

What a beautiful Snake!

The patterns and colors are beautiful! Nice spotting!

What a lovely snake!

Gorgeous snake, and a fun composition!