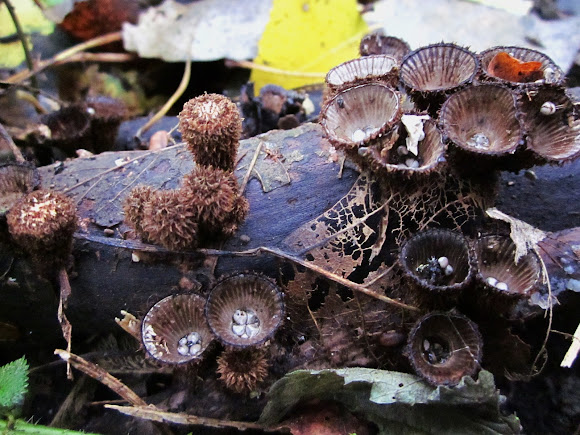 Cyathus striatus can reproduce both asexually (via vegetative spores), or sexually (with meiosis), typical of taxa in the basidiomycetes that contain both haploid and diploid stages. Basidiospores produced in the peridioles each contain a single haploid nucleus. After the spores have been dispersed into a suitable growing environment, they germinate and develop into homokaryotic hyphae, with a single nucleus in each cell compartment. When two homokaryotic hyphae of different mating compatibility groups fuse with one another, they form a dikaryotic mycelia in a process called plasmogamy. After a period of time and under the appropriate environmental conditions, fruiting bodies may be formed from the dikaryotic mycelia. These fruiting bodies produce peridioles containing the basidia upon which new spores are made. Young basidia contain a pair of haploid sexually compatible nuclei which fuse, and the resulting diploid fusion nucleus undergoes meiosis to produce haploid basidiospores.[14] The process of meiosis in C. striatus has been found to be similar to that of higher organisms.[15] [edit] Spore dispersal The cone shaped fruiting body of Cyathus striatus makes use of a splash-cup mechanism to help disperse the spores. When a raindrop hits the interior of the cup with the optimal angle and velocity, the downward force of the water ejects the peridioles into the air. The force of ejection rips open the funiculus, releasing the tightly wound funicular cord. The hapteron attached to the end of the funiculus is adhesive, and when it contacts a nearby plant stem or stick, the hapteron sticks to it; the funicular cord wraps around the stem or stick powered by the force of the still-moving peridiole (similar to a tetherball). The peridioles degrade over time to eventually release the spores within, or they may be eaten by herbivorous animals and redeposited after passing through the digestive tract (wikipedia)

MedicinalProperties Antibiotic activity The mycelia and cultural filtrates of C. striatus were tested for antibiotic activity against Bacillus cereus, Bacillus subtilis, Staphylococcus aureus, Escherichia coli, Proteus mirabilis, Salmonella typhimurium and Candida albicans. C. striatus was shown to have antibacterial activity against B. cereus and B. subtilis (Colletto and Giardino, 1996). Antibiotics named striatins A, B, and C have been isolated from the mycelium of Cyathus striatus. The striatins are active against a variety of Gram-positive bacteria, some Gram-negative bacteria, and highly active against fungi imperfecti (Anke and Oberwinkler, 1977). The chemical structures of these antibiotics have been elaborated using X-ray crystallography (Hecht et al., 1978). A later study investigated the optimization of striatin production using fermentation technology (Gehrig et al., 1998). Striatins A and B were tested in culture media against various forms of Leishmania species and Trypanosoma cruzi. These protozoa cause diseases that are responsible for considerable mortality and morbidity, especially in tropical areas. Striatins A and B showed in vitro activity at 10 and 5 µg/ml, respectively. BALB/c mice infected with Leishmania amazonensis were treated 3 weeks post-infection with striatins A or B (daily dose of 10 mg/kg, subcutaneously, for 15 days). Treatment with the reference drug, N-methylglucamine antimonite (an anti-leishmanial drug with known properties), reduced the parasite burden by 71.2%. Treatment with striatin A slightly decreased the parasite burden in the footpad by 17.6%; treatment with striatin B had no effect and was more toxic than striatin A (Inchausti et al., 1997). Anti-cancer effects NF-kB (nuclear factor kappa B) is a protein complex that is involved in regulating the immune response to infection. Alterations in the body’s response to NF-kB has been implicated in the pathology of various diseases, including cancer. For instance, it is known that in several human cancers, the NF-kB gene regulation pathway is always turned on, disrupting normal gene expression patterns and enabling some cells to survive in conditions where others would die. Fungal extracts prepared from Cyathus striatus showed significant inhibitory effects on the NF-kB activation pathway, suggesting activities worthy of investigation as cancer therapeutics ( http://healing-mushrooms.net/archives/cy... ), ( http://www.mycobank.org/MycoTaxo.aspx?Li... )

maybe, but to be sure you could ask clive, if the bird nest fungi in nz significant different from our european sp. . I 'm not familiar enough with those details, to really say something about it. No problem, some of the sites i get the infos from, do i visit repeatedly !! worth to put them into the favorites !! :) thx

these are the exact same ones we are finding here in NZ at this time thankyou for all the information Alex!