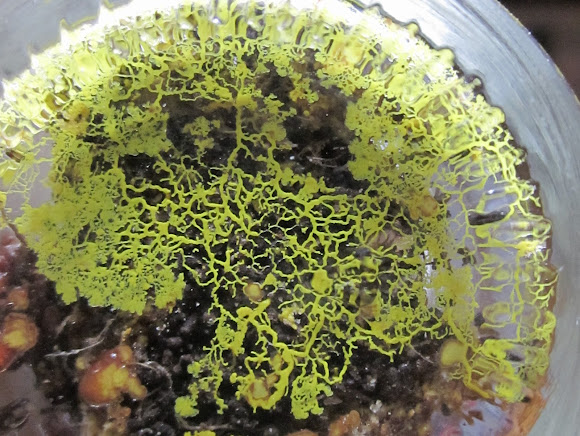 Sporocarps sessile, heaped, subglobose, 0.2-0.4 mm diam., yellow, rarely grey, greenish when immature. Hypothallus colourless or pale brown, confluent. Peridium single, usually with circular yellow, crystalline plates. Capillitium reticulate with numerous small, angular and branched yellow lime nodes. Spore-mass brown. Spores pale lilac-brown, 7-10 µm diam., verruculose and often with groups of larger warts. Plasmodium yellow ( discoverlife ) ------What these three groups have in common is a life cycle that superficially resembles that of the fungi. When conditions become unfavorable, these slime molds form sporangia - clusters of spores, often on the tips of stalks such as in the sporangium of a Physarum shown at right. Spores from the sporangia are dispersed to new habitats, "germinate" into small amoebae, and the life cycle begins again. Similarities in the life cycle do not, however, imply close relationship, especially when one considers that certain bacteria (the myxobacteria) and even an unusual ciliate have very similar life cycles, aggregating to form spores on a sporangium. Slime molds have almost no fossil record, which is not surprising. Not only do slime molds produce few resistant structures (except for spores, which are often overlooked or unidentifiable), but they live in moist terrestrial habitats, such as on decaying wood or fresh cow dung, where their potential for preservation is low. A few fossil slime molds have been found in amber ( http://www.ucmp.berkeley.edu/protista/sl... )

The most important characteristic of this family is the presence of lime (calcium carbonate) deposits, which may occur in the peridium, capillitium, or stalk of the fruiting body. The spore mass colour is normally dark brown to purple-brown to black. ( http://hiddenforest.co.nz/slime/index.ht... )

( http://www.mycobank.org/MycoTaxo.aspx?Li... ), ( http://www.discoverlife.org/mp/20q?searc... ), ( http://www.verspreidingsatlas.nl/936330 ), ( http://www.inbo.be/docupload/3062.pdf ), ( http://slimemold.uark.edu/fungi/default.... ), ( http://slimemold.uark.edu/fungi/default.... )the other phases of this spotting will follow (the common dutch name is: Grijsgroen kalkkopje)----- on the last picture are ripe fruitingbodies to see, they were covered under bark and decaying wood and other stuff, thats why they look so flatted.No other species is found at this log, therefore assume i, that all stages are from the same species! = outside ( http://www.projectnoah.org/spottings/934... ) / home: ( http://www.projectnoah.org/spottings/933... ) / -- i think the yellow/brown balls are maybe fruitingbodies, when i treat them good and feed them well, maybe they will go again into the next phase of life-circle!!

thanks antonio, THAT'S my favorite. I'm a little frustrated that he isn't easy to fondle.:)