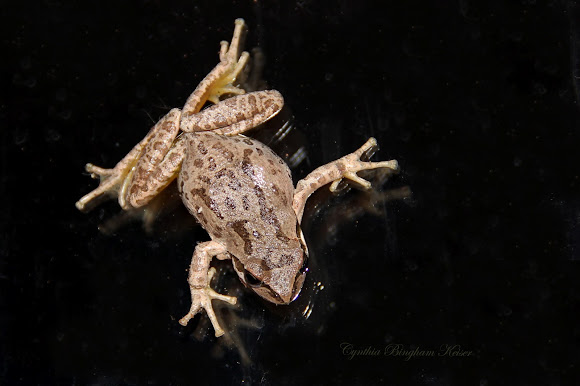 This frog is grayish tan color with a darker pattern on body. There's a dark stripe from tip of nose, across the eye to its shoulder.

On outside kitchen window at night. I should have got a shot of its underside :(

"The Baja Caifornia Treefrog, the Northern Pacific Treefrog, and the Sierran Treefrog all used to be considered the same frog: the Pacific Treefrog, but now they are considered to be three species. Together, they occur throughout almost the entire state, and are probably the most commonly seen frogs in the California, and are certainly the most commonly heard. They all look and sound the same, so you need to look at a range map to determine which species you are looking at." - CaliforniaHerps.com

Thanks Ava for the info!

Wow! thanks so much Cindy & Ava! a really nice information ... btw, great photos you have.

"Baja" is Spanish for below or under. In this part of the world it refers to the state in Mexico just south of California US, which is called Baja California, Mexico.

Baja is a region of Mexico near the California border. There are several subspecies of the Pacific Treefrog and our local one is named after the Baja region since I'm so close to the border of Mexico.