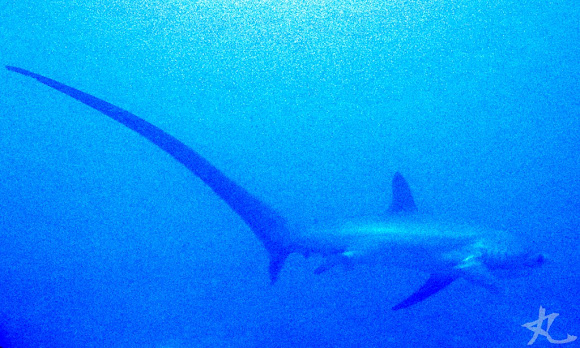 The Pelagic Thresher is a species of thresher shark, which is characterized by the greatly elongated upper lobes of their caudal fins, which can be as long as its body. Pelagic thresher sharks occur in the tropical and subtropical waters of the Indian and Pacific Oceans, usually far from shore but occasionally entering coastal habitats. It is distinguished from the common thresher (A. vulpinus) by the dark, rather than white, color over the bases of its pectoral fins. The smallest of the three thresher species, the pelagic thresher typically measures 3m long. A. pelagicus was assessed by the International Union for Conservation of Nature (IUCN) as a vulnerable species in 2007.

As its name suggests, this shark is pelagic or oceanic.

I went to Malapascua, Cebu to observe thresher sharks, and I was not disappointed. My group saw 4 fully-grown sharks at Monad Shoal, which is the sharks' cleaning station. We were at a depth of 20m or so, just at the edge of the shoal, and one by one the sharks came circling in magnificently.

Thanks for the info Blogie wonderful experience you have!

Hey Gerardo. It was an amazing experience! But it's not really rare to see them where I went. From Malapascua Island, dive operators take dive groups to Monad Shoal for thresher shark watching, and the chances of seeing them are pretty favorable. They're awesome creatures!

Wow super spotting so rare to see them!