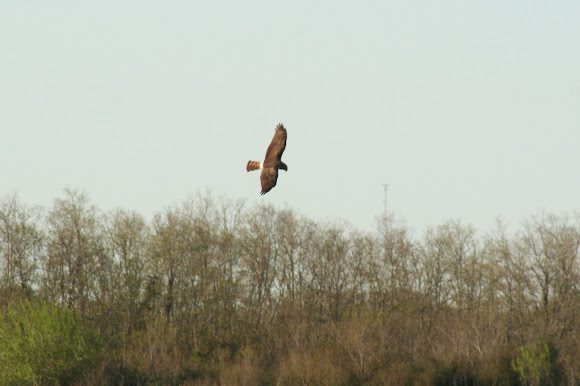 The Hen Harrier is 45–55 cm long with a 97–118 cm wingspan.[3] It resembles other harriers in having distinct male and female plumages. The sexes also differ in weight, with males weighing an average of 350 g and females an average of 530 g.[2] The male of the nominate race, C. c. cyaneus (Linnaeus, 1766), breeds in Europe and Asia, is mainly grey above and white below except for the upper breast, which is grey like the upperparts, and the rump, which is white; the wings are grey with black wingtips. The female is brown above with white upper tail coverts, hence females, and the similar juveniles, are often called "ringtails". Their underparts are buff streaked with brown

The Hen Harrier (Circus cyaneus) or Northern Harrier (in North America) is a bird of prey. It breeds throughout the northern parts of the northern hemisphere in Canada and the northernmost USA, and in northern Eurasia. This species is polytypic, with two subspecies. Marsh Hawk is a historical name for the American form.[2] It migrates to more southerly areas in winter. Eurasian birds move to southern Europe and southern temperate Asia, and American breeders to the southernmost USA, Mexico, and Central America. In the mildest regions, such as France, Great Britain, and the southern US, Hen Harriers may be present all year, but the higher ground is largely deserted in winter.

He caught a snake in the second pic

Nice shot!! I always look for the white rump patch with these guys - male and female both have them.