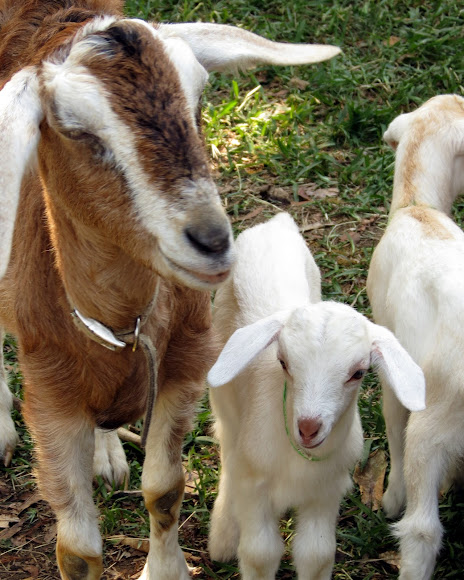 Domestic Goat (Capra aegagrus hircus) - a nanny and her two three-week old kids - at Fruit & Spice Park, Homestead (Redland), Florida. Goats have horizontal slit-shaped pupils which can be seen in the last photo. << Goats have an intensely inquisitive and intelligent nature: they will explore anything new or unfamiliar in their surroundings. They do so primarily with their prehensile upper lip and tongue. >>

The domestic goat (Capra aegagrus hircus) is a subspecies of goat domesticated from the wild goat of southwest Asia and Eastern Europe. The goat is a member of the family Bovidae and is closely related to the sheep as both are in the goat-antelope subfamily Caprinae. There are over three hundred distinct breeds of goat. Goats are one of the oldest domesticated species. Goats have been used for their milk, meat, hair, and skins over much of the world. In the twentieth century they also gained in popularity as pets. Female goats are referred to as does or nannies, intact males as bucks or billies; their offspring are kids. Goats are ruminants. They have a four-chambered stomach consisting of the rumen, the reticulum, the omasum, and the abomasum. As with other mammal ruminants, they are even-toed ungulates. The females have an udder consisting of two teats, in contrast to cattle, which have four teats. Goats have horizontal slit-shaped pupils, an adaptation which increases peripheral depth perception. Because goats' irises are usually pale, their contrasting pupils are much more noticeable than in animals such as cattle, deer, most horses and many sheep, whose similarly horizontal pupils blend into a dark iris and sclera. Goats are extremely curious and intelligent. They are also known for escaping their pens. Goats will test fences, either intentionally or simply because they are handy to climb on. If any of the fencing can be spread, pushed over or down, or otherwise be overcome, the goats will escape. Due to their high intelligence, once they have discovered a weakness in the fence, they will exploit it repeatedly. Goats are very coordinated and can climb and hold their balance in the most precarious places. Goats are also widely known for their ability to climb trees, although the tree generally has to be on somewhat of an angle. The vocalization goats make is called bleating. Goats have an intensely inquisitive and intelligent nature: they will explore anything new or unfamiliar in their surroundings. They do so primarily with their prehensile upper lip and tongue. (credit: http://en.wikipedia.org/wiki/Goat)

It is the time for Baby Goats, My daughter has been bottle-feeding 4 for the last month.