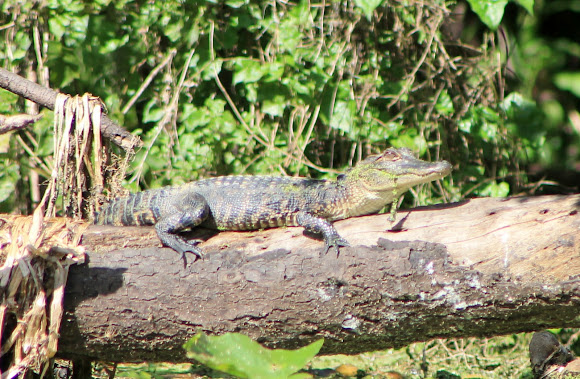 The American alligator has a large, slightly rounded body, with thick limbs, a broad head, and a very powerful tail. Adult Alligators generally have dark gray or nearly black color. They may at times appear to be lighter based on detritus or algae in the water covering their skin. Juvenile alligators have a striped pattern for camouflage that they lose as they mature. Averaging about 9.5 in (24 cm) in length when newly hatched, alligators reach sexual maturity when they measure about 5–7 ft (1.5–2.1 m).[3] Adult male alligators average 11.2 ft (3.4 m) in length, while adult females average 8.2 to 9.8 ft (2.5 to 3.0 m).[4][5][6][7] Average adult body weights are reported from 270 to 800 lb (120 to 360 kg), with a few exceptionally large and old males exceeding 14 ft (4.3 m) and 1,000 pounds (450 kg).[8][9][10] One American Alligator reached a length of 19 feet 2 inches (5.84 m) and 2,200 lb (1,000 kg),[11] which made it not only the largest alligator ever recorded, but also among the largest crocodilians on record. The tail, which accounts for half of the alligator's total length, is primarily used for aquatic propulsion. The tail can also be used as a weapon of defense when an alligator feels threatened. Alligators travel very quickly in water and while they are generally slow-moving on land, alligators can lunge short distances very quickly. They have five claws on each front foot and four on each rear foot. American Alligators have the strongest laboratory measured bite of any living animal, measured at up to 9,452 newtons (2,125 lbf) in laboratory conditions. It should be noted that this experiment has not (at the time of the paper published) been replicated in any other crocodilians.[12] Some alligators are missing an inhibited gene for melanin, which makes them albino. These alligators are extremely rare and almost impossible to find in the wild. They could survive only in captivity. Like all albino animals, they are very vulnerable to the sun and predators.[13] American Alligators can remain underwater for several hours if not actively swimming or hunting (then it is only about 20 minutes); they do this by rerouting blood to reduce circulation to the lungs, and thus the need for oxygen

American alligators are mostly found in the Southeastern United States, from Great Dismal Swamp in North Carolina south to Everglades National Park in Florida and west to the southern tip of Texas. They are found in the U.S. states of North Carolina, South Carolina, Georgia, Florida, Louisiana, Alabama, Mississippi, Arkansas, Texas, and Oklahoma. Florida and Louisiana currently have the largest population of alligators. Florida has an estimated population of 1 to 1.5 million while Louisiana has an estimated population of 1.5 million Although primarily freshwater animals, alligators will occasionally venture into brackish water.[14] Alligators live in wetlands and this is the vital habitat that holds the key to their continued long-term survival. Alligators depend on the wetlands, and in some ways the wetlands depend on them. As apex predators, they help control the population of rodents and other animals that might overtax the marshland vegetation. American alligators are less prone to cold than American crocodiles. Unlike the American crocodile, which would immediately succumb to the cold and drown in water of 45 °F (7.2 °C), an alligator can survive in such temperatures for some time without any signs of evident discomfort.[15] It is thought that this adaptiveness is the reason why American alligators spread farther north than the American crocodile.[15] In fact, the American alligator is found farther from the equator and is more equipped to deal with cooler conditions than any other crocodilian.[16] In Florida, alligators face ambient temperature patterns unlike elsewhere in their range. The consistently high temperatures lead to increased metabolic cost. Alligators in the Everglades have reduced length to weight ratio, reduced total length, and delayed onset of sexual maturity compared with other parts of their range. The reason for this poor condition is currently suspected to be a combination of low food availability and sustained high temperatures

Alligators eat fish, birds, turtles, snakes, mammals, and amphibians. Hatchlings diet on invertebrates, insects, larvae, snails, spiders, worms, and other small prey. Young alligator regularly eat small fish at any opportunity. As they grow, they gradually move on to larger fish, mollusks, frogs and small mammals like rats, and mice. Some adult alligators take a larger variety of prey ranging from a snake or turtle to a bird and moderate sized mammals like a raccoon or deer, although fish remain central in their diet. Once an alligator reaches adulthood, any animal living in the water or coming to the water to drink is potential prey. Adult alligators will eat wild boars, deer, dogs of all sizes, livestock including cattle and sheep, and are often known to kill and eat smaller alligators. In rare instances, large male alligators have been known to prey on the Florida panther and American black bear, making the American alligator the apex predator throughout its distribution.[17] The American alligator is known as King of the Everglades, although the American crocodile, which shares parts of the Everglades with the alligator, is capable of growing larger (over 5 meters), mostly in warmer regions like Central America, Mexico, and the Caribbean. Although fish and other prey taken in the water or at the water edge form the major part of alligator's diet, adult alligators also spend considerable time hunting on land, up to 50 m (170 feet) from water, ambushing terrestrial animals on trailsides and road shoulders on warm nights.[18] The gizzards (stomachs) of alligators often contain gastroliths. The function of these stones is to grind up food in the stomach and help with digestion. This is important because gators swallow their food whole. These gastroliths are also used in buoyancy control. Prey is usually swallowed whole with prey such as hogs and deer that are too large to be swallowed whole often being stashed underwater (such as pinned under a log) so that the hide is soft and rotted enough for the alligator to bite through. The teeth of the alligator are designed to grip prey but can not rip flesh as well as some other predators (including crocodiles).[19] The biting force of the alligator is enormous, packing enough power to smash a turtle's shell or through a moderately sized mammal bone.[19] In 2005, the bite force of a 12-foot (3.7 m), 450-pound (200 kg) alligator was measured to be 2209 pounds-force (9.826 kN)by Greg Ericson.[20] American alligators cruise through water at just over 1 mph (0.4 m/s); in pursuit of prey they

Thanks, I love the gators, misunderstood creatures, much like snakes