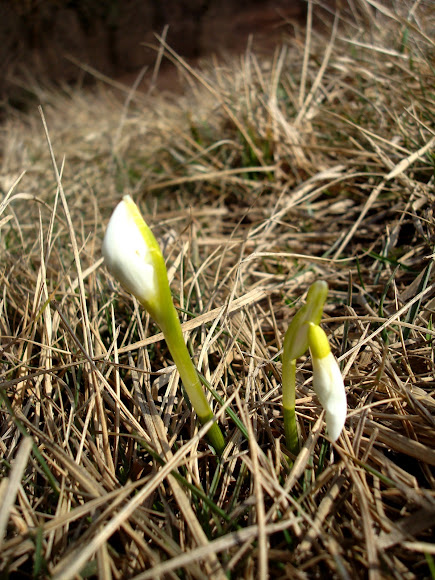 They are perennial, herbaceous plants which grow from bulbs. Each bulb generally produces two linear, or very narrowly lanceolate, greyish-green leaves and an erect, leafless scape (flowering stalk), which bears at the top a pair of bract-like spathe valves joined by a papery membrane. From between them emerges a solitary, pendulous, bell-shaped white flower, held on a slender pedicel.The flower consists of six tepals, also referred to as segments. The outer three are larger and more convex than the inner ones. The inner flower segments are usually marked on their outer surface with a green, or greenish-yellow, V or U-shaped mark (sometimes described as "bridge-shaped") over the small "sinus" (notch) at the tip of each tepal. The inner surface has a faint green mark covering all or most of it. Occasionally plants are found with green markings on the outer surface of the outer tepals.The six long, pointed anthers open by pores or short slits. The ovary is three-celled, ripening into a three-celled capsule. Each whitish seed has a small, fleshy tail (the elaiosome) containing substances attractive to ants which distribute the seeds. The leaves die back a few weeks after the flowers have faded.

It grows to around 7–15 cm tall, flowering between January and April in the northern temperate zone (January–May in the wild). It is native to a large area of Europe, from Spain in the west, eastwards to the Ukraine. It is found in Albania, Armenia, Austria, Bulgaria, the Czech Republic, France, Georgia, Germany, Greece, Hungary, Italy, Poland, Moldova, Romania, Slovakia, Spain, Switzerland, Turkey, Ukraine and the former Yugoslavia.

It contain an active substance called galantamine, (or galanthamine), which can be helpful in the treatment of Alzheimer's disease, though it is not a cure.