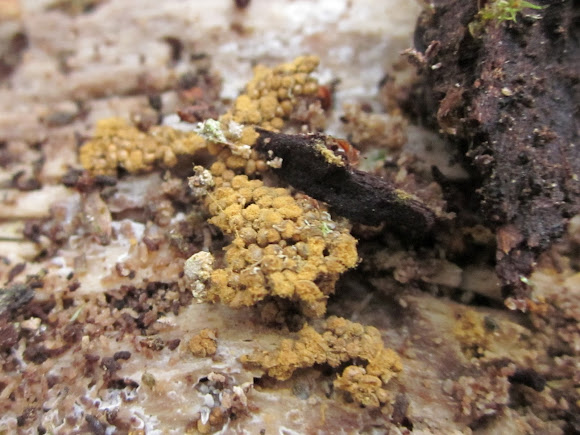 ------What these three groups have in common is a life cycle that superficially resembles that of the fungi. When conditions become unfavorable, these slime molds form sporangia - clusters of spores, often on the tips of stalks such as in the sporangium of a Physarum shown at right. Spores from the sporangia are dispersed to new habitats, "germinate" into small amoebae, and the life cycle begins again. Similarities in the life cycle do not, however, imply close relationship, especially when one considers that certain bacteria (the myxobacteria) and even an unusual ciliate have very similar life cycles, aggregating to form spores on a sporangium. Slime molds have almost no fossil record, which is not surprising. Not only do slime molds produce few resistant structures (except for spores, which are often overlooked or unidentifiable), but they live in moist terrestrial habitats, such as on decaying wood or fresh cow dung, where their potential for preservation is low. A few fossil slime molds have been found in amber ( http://www.ucmp.berkeley.edu/protista/sl... )

Sporocarps gregarious or crowded, sessile or with a short, stout, black stalk, rarely subplasmodiocarpous. Sporotheca shining yellow, globose, obovoid or somewhat elongate, 0.5-0.9 mm wide. Peridium membranous. Hypothallus broadly expanded, inconspicuous. Capillitium of simple or rarely branched elaters, 3-5 µm diam., bearing 2(-3) irregular spiral bands, these prominent and in places remote, the apices often swollen behind the conical tip. Spore-mass yellow to orange-yellow. Spores dull pale yellow, verruculose, 12-14 µm diam. Plasmodium white ( http://www.discoverlife.org/mp/20q?searc... )----- ( http://slimemold.uark.edu/fungi/WebForms... ), ( http://www.flickr.com/photos/41066614@N0... )= spores ( http://www.projectnoah.org/spottings/934... ) [fopdraadwatje-> dutch]--- because it was under the bark, i assumed they were flattend, both spottings ( trichia varia and the plasmodial slime mold [ http://www.projectnoah.org/spottings/934... ] ) are only 10 cm apart. I found nowhere else on this log any signs of slime molds, therefore thought i, it were different stages (maybe it is !!). I thought they would look a bit like this ( http://www.sciencephoto.com/media/139109... ) , then i went further with physarum, i found this ( http://www.google.nl/search?hl=nl&q=... ), the most picture which look similiar {yellow,bobbly,} ,are named P. virescens, which is listed as common here. I thought: bingo !!! {it is one of the species i wanted to find very much !! :) } -----But thanks to clive is this cleared :)