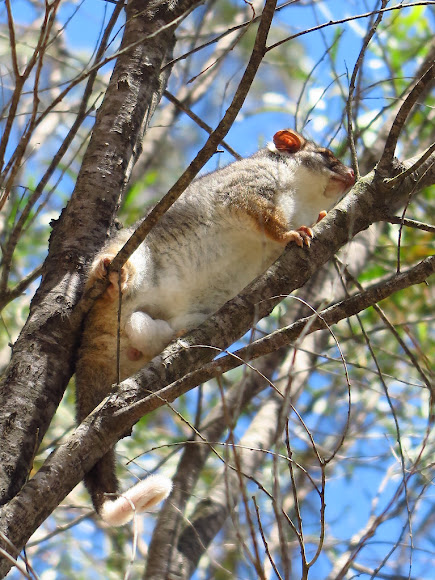 This ringtail possum (ringy) was spotted in a tree in broad daylight. Unusual to see this because they are a nocturnal species. This is a male specimen. Mostly grey with white underside, its colouration is different from the ringtails I usually see in Brisbane, which are red. Hawks and eagles patrol this area, so this fellow is at great risk should he be spotted at this location. I returned to the area later in the day but he had gone, hopefully having found a safe refuge until nightfall.

Found in a tree alongside a dirt track. Rural area with pockets of native bushland nearby.

Thanks guys. I love them too, Mark. Different to the one's I see in Brisbane. Good tip re: a raincoat. I didn't have a problem with this fellow, but I did have a turtle pee and poo on me. It would have come in handy then. Thankfully it didn't smell, but I felt like a rugged bushy for fleeting moment haha

Love 'em.
When photographing from below wear a raincoat.