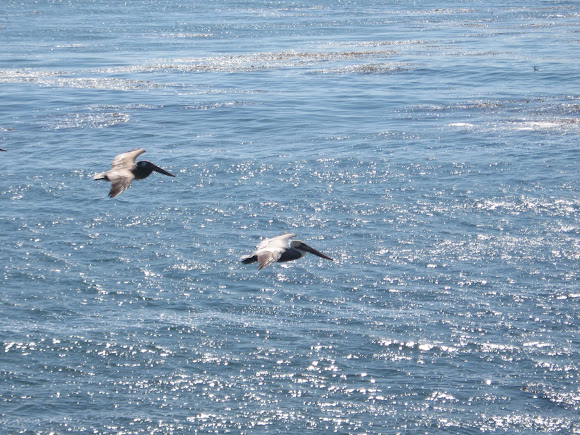 The brown pelican is the smallest of the eight species of pelican, although it is a large bird in nearly every other regard. It is 106–137 cm (42–54 in) in length, weighs from 2.75 to 5.5 kg (6.1 to 12.1 lb) and has a wingspan from 1.83 to 2.5 m (6.0 to 8.2 ft). Through most of its range, the brown pelican is an unmistakable bird. Like all pelicans, this species has a very large bill, 28 to 34.8 cm (11.0 to 13.7 in) long in this case, with a gular pouch on the bottom for draining water when it scoops out prey. The head is white but often gets a yellowish wash in adult birds. The bill is grayish overall in most birds, though breeding birds become reddish on the underside of the throat. The back, rump, and tail are streaked with gray and dark brown, sometimes with a rusty hue. In adult pelicans, the breast and belly are a blackish-brown and the legs and feet are black. The juvenile is similar but has a brownish-gray neck and white underparts.

Brown Pelicans live year-round in estuaries and coastal marine habitats along both the east and west coasts. They breed between Maryland and Venezuela, and between southern California and southern Ecuador—often wandering farther north after breeding as far as British Columbia or New York.

Walking along the coast of Santa Cruz I spotted quite a few groups of pelicans flying above, decided to take a few shots. This is one of the only I could get, hopefully I can get some better pictures of this species in the future.

@Kibuyu Thank you for the species ID suggestion :)

@Mark Hello mark, thank you for the suggestion. I was aware that they where pelicans, I wasn't sure what type of species they where though. We have quite a few of them who hang out along the coast, I really should get some better pictures. Perhaps eventually :)

Hi Alexander.. please write just a few words about each location on your spottings. Thanks. These look like pelicans?