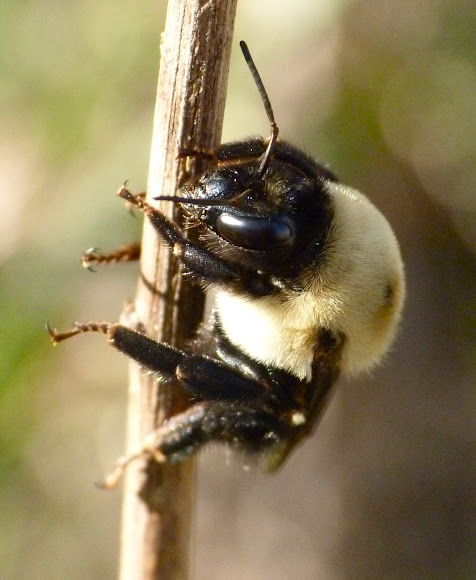 Bumble bee nests are first constructed by over-wintered queens in the spring (in temperate areas). Upon emerging from hibernation, the queen collects pollen and nectar from flowers and searches for a suitable nest site. The characteristics of the nest site vary among bumble bee species, with some species preferring to nest in underground holes and others in tussock grass or directly on the ground. Once the queen finds a site, she prepares wax pots to store food, and wax cells to lay eggs in. These eggs then hatch into larvae, which cause the wax cells to expand isometrically into a clump of brood cells. With proper care, the larvae progress through four instars, becoming successively larger with each moult. At the end of the fourth instar, the larvae spin silk cocoons under the wax covering the brood cells, changing them into pupal cells. The larvae then undergo an intense period of cellular growth and differentiation and become pupae. These pupae then develop into adult bees, and chew their way out of the silk cocoon. When adult bumble bees first emerge from their cocoons, the hairs on their body are not yet fully pigmented and are a greyish-white colour. The bees are referred to as "callow" during this time, and they will not leave the colony for at least 24 hours. The entire process from egg to adult bee can take as long as five weeks, depending on the species and the environmental conditions. After the emergence of the first or second group of workers, workers take over the task of foraging and the queen spends most of her time laying eggs and caring for larvae. The colony grows progressively larger and at some point will begin to produce males and new queens. The point at which this occurs varies among species and is heavily dependent on resource availability and environmental factors. Unlike the workers of more advanced social insects, bumble bee workers are not physically reproductively sterile and are able to lay haploid eggs that develop into viable male bumble bees. Only fertilised queens can lay diploid eggs that mature into workers and new queens. Early in the colony cycle, the queen bumble bee compensates for potential reproductive competition from workers by suppressing their egg-laying by way of physical aggression and pheromonal signals. Thus, the queen will usually be the mother of all of the first males laid. Workers eventually begin to lay male eggs later in the season when the queen's ability to suppress their reproduction diminishes. The reproductive competition between workers and the queen is one reason that bumble bees are considered "primitively eusocial". New queens and males leave the colony after maturation. Males in particular are forcibly driven out by the workers. Away from the colony, the new queens and males live off nectar and pollen and spend the night on flowers or in holes. The queens are eventually mated (often more than once) and search for a suitable location for diapause (dormancy).

This bee was clinging to a dried stalk in the meadow for at least 30 minutes. Presumably it was a queen just come out of hibernation & was warming itself before attempting to fly.

Thanks Juan! I always get these two species confused!

Hi Karen, this is not a Carpenter bee (Xylocopa) but a Bumblebee