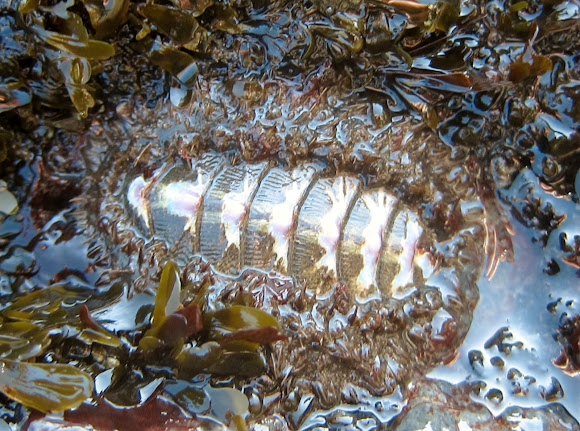 Mossy Chiton spotted on a rock during low tide at a Sonoma County beach near Bodega, CA. It was small, approx 3 inches long and 2 inches wide. Mossy Chiton are located intertidal to 5m, in northern Mexico to southern Alaska, size up to 10cm. This is a common species. It has thick, bristly hairs on the girdle. The plates are often eroded and are a distinct blue color on the underside. http://www.bily.com/pnwsc/web-content/Fa...

On a rock during low tide at a Sonoma County beach near Bodega, CA.

Chitons are small to large, marine molluscs in the class Polyplacophora, which formerly was known as Amphineura. There are approximately 940 extant and 430 fossil species recognized. These molluscs are also sometimes commonly known as sea cradles or "coat-of-mail shells". They are also sometimes referred to more formally as loricates, polyplacophorans, and rarely as polyplacophores. Chitons have a dorsal shell which is composed of eight separate shell plates or valves. These plates overlap somewhat at the front and back edges, and yet the plates articulate well with one another. Because of this, although the plates provide good protection for impacts from above, they nonetheless permit the chiton to flex upward when needed for locomotion over uneven surfaces, and also the animal can slowly curl up into a ball when it is dislodged from the underlying surface. The shell plates are surrounded by a structure known as a girdle. Wikipedia