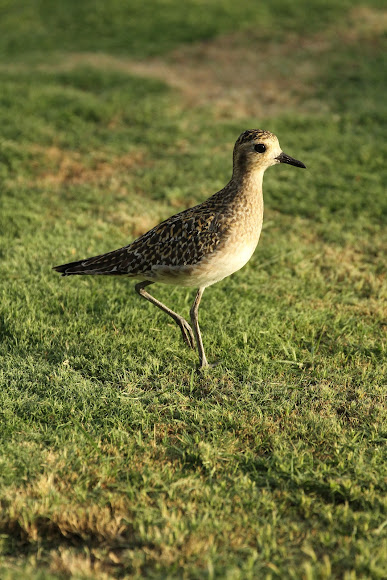 The Pacific golden plover (Pluvialis fulva) is a medium-sized plover. The 23–26 cm long breeding adult is spotted gold and black on the crown, back and wings. Its face and neck are black with a white border and it has a black breast and a dark rump. The legs are black. In winter, the black is lost and the plover then has a yellowish face and breast, and white underparts. It is similar to two other golden plovers, Eurasian and American. Pacific golden plover is smaller, slimmer and relatively longer-legged than European golden plover, Pluvialis apricaria, which also has white axillary (armpit) feathers. It is more similar to American golden plover, Pluvialis dominica, with which it was once considered conspecific (as "lesser golden plover", see Sangster et al., 2002). The Pacific golden plover is slimmer than the American species, has a shorter primary projection, and longer legs, and is usually yellower on the back. The breeding habitat of Pacific golden plover is Arctic tundra from northernmost Asia into western Alaska. It nests on the ground in a dry open area. This bird forages for food on tundra, fields, beaches and tidal flats, usually by sight. It eats insects and crustaceans and some berries.

This wader is migratory and winters in south Asia and Australasia. A few winter in California and Hawaii, USA. In Hawaii, the bird is known as the kolea. It is a very rare vagrant to western Europe.

Found in my backyard

What a beautiful bird! Great shots too :)